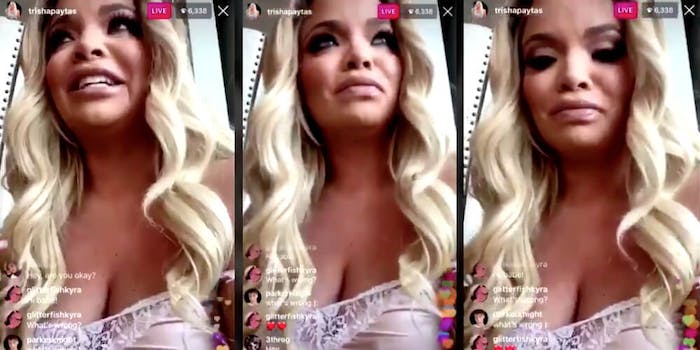 'Please leave wherever you are. That Live was frightening.'

In the video, Paytas is seen crying and a man’s voice can be heard in the background, seemingly saying, “I have a court case tomorrow. I could go to jail,” prompting her to end the stream.

Was I the only one watching Trisha Paytas on her live right now where she was crying and you could hear a guy in the back saying Trisha no please I have a court case I can go to jail like….what is happening pic.twitter.com/Z3cK41Spok

so trisha paytas made an instagram live saying she wasn't okay and that she didnt know what to do and was really upset and someone was telling her "dont do this", she ended the live abruptly and then did another one WHAT HAPPENED @trishapaytas are you okay?? pic.twitter.com/Dm6Hf3a5l8

Anyone else just get a sketchy vibe from #TrishaPaytas instagram live?

What the hell just happened on Trisha live?? #TrishaPaytas

In a second video later on that day, Paytas assured her fans that everything was OK.

“Sorry, I ended that last one abruptly. Everything’s good. I was just really emotional, and I was feeling overwhelmed,” she says.

Some fans are speculating the man in the background could have been fellow YouTuber Jaclyn Hill’s ex-husband, Jon Hill. Paytas recently posted videos of them kissing on her Instagram story, which caused some controversy online.

Twitter users immediately began theorizing about the video. Some are worried and think Paytas is being held against her will, while others think it was Hill’s voice in the background and believe he might be in legal trouble.

“@trishapaytas please leave wherever you are that live was frightening,” Twitter user @hannahbechill wrote.

“Honestly, I always take everything Trisha Paytas says with SEVERAL grains of salt… BUT… To me, Trish genuinely looked both scared and exhausted in her IG live today. I just got a really weird feeling from it, and it’s not the usual ‘Trisha’s back on her bullshit’ feeling,” Twitter user @Fallen_Darling wrote.

Honestly, I always take everything Trisha Paytas says with SEVERAL grains of salt… BUT… To me, Trish genuinely looked both scared and exhausted in her IG live today. I just got a really weird feeling from it, and it's not the usual "Trisha's back on her bullshit" feeling.

Shits about to go down. She just went live on IG crying with some dude in the back saying “Trisha please”! Then she ended it. Wouldn’t even talk to her fans that was asking what’s wrong.

Other fans think the incident could be her making fun of a recent controversy surrounding YouTuber and singer Lia Marie Johnson. In an Instagram Live filmed on Jan. 2, an unknown man believed to be Johnson’s producer, Stephen Wetherbee, is seen trying to kiss and touch Johnson, who is presumed to be under the influence, before realizing she’s streaming it.

“Are you on Instagram? No you’re not. You can’t be on Instagram. Are you really on Instagram? Because that would be bad,” he tells her before grabbing her phone and turning off the stream.

In a second Instagram Live, the man says, “I need this not to go out because it will affect my work, please.”

While some fans believe Paytas, who is known for trolling fans online, is making a parody of that incident, others do not think the two videos are similar enough.

IS SHE MAKING FUN OF LIA ? WITH HER PRODUCER SAYING THE SAME THING IN THE BACK?

Trisha and her lame ass insta live. We all know how she is. She loves to play that victim card especially when she trying to cover something up. Like the fact that she's been out partying this last week and has been high af. People buying her acts are stupid af #trishapaytas

While there is not a lot to go off of from just two videos, fans are generally worried about Paytas’ wellbeing, as she is known for vlogging during low points in her life.