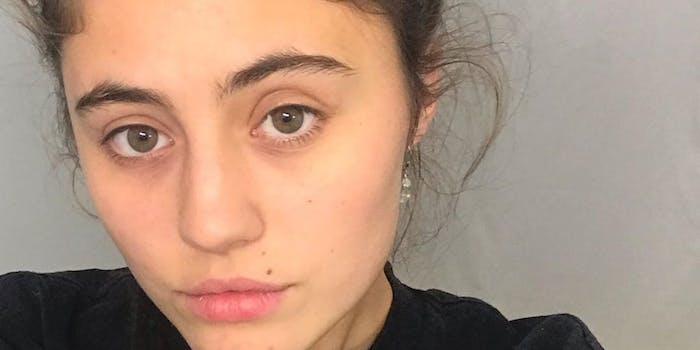 They're flocking to her aid.

YouTuber Lia Marie Johnson posted a head-turning stream to her Instagram Live this week, and fans are concerned.

The 23-year-old content creator previously caused a stir among her fans after she posted a number of similarly concerning Instagram Live streams over the summer. The latest video has fans again rallying around the young star, asking about her well-being and urging those around her to keep a close eye.

Johnson first reached mainstream attention in 2011 with her presence on Fine Bros. Entertainment’s Kids React series. Since those days, she has created a following all her own. Her personal YouTube channel has 1.8 million subscribers, and her Instagram boasts a similar following. Since her days on Kids React, Johnson has pursued a successful career in music and on YouTube.

Fans began worrying about Johnson’s state of mind after she posted a lengthy video on Christmas Eve. Over the course of more than two hours, Johnson rambled in slightly slurred tones and insisted to viewers that she was not on drugs. She instead insisted that her behavior was due to her mindset, rather than any mind-altering substance. As fans heaped on with questions about her mental health and behavior, Johnson grew increasingly upset.

After a brief pause, Johnson returned with an unidentified bottle wrapped in a black bag. She drank from it and continued interacting with viewers, singing songs and chatting away. “I would like all of you to stay sober over the holiday season,” she said at one point. “Stay as sober as you can, because your family loves you and you’re needed and wanted and totally loved.”

Many of Johnson’s fans felt unease at the video, expressing their concern in the comments and asking after Johnson’s well-being. Other’s noted that the singer’s actions were normal, and those concerned were merely unaccustomed to Johnson’s personality and interactions. The disquiet over her condition even spread to Twitter, where “Drama Alert” host Keemstar posted about the video.

“Lia Marie Johnson is going to die next unless someone saves this girl,” he wrote. “Ive never known her or met her. but if anyone seeing this does please reach out to her.”

Since the video was posted, Johnson hasn’t been very active online. She posted a brief video to her Instagram story on Christmas, showing an overjoyed child playing with a hand-controlled drone. The person filming the video, presumably Johnson, can be heard laughing in the background.

Fans are continuing to flock around Johnson, spreading their love and support and urging the young star to stay healthy. The Daily Dot reached out to Johnson, but she did not respond before publication.