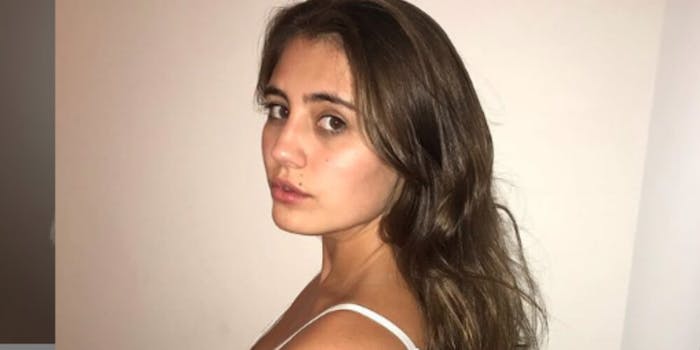 Her producer kissed her while she was suspected to be under the influence, and then 'hijacked' her phone after realizing she was live streaming it.

Fans are extremely worried for YouTuber Lia Marie Johnson after an Instagram Live of her with her producer went viral.

In the Instagram Live, a man believed to be Johnson’s producer, Stephen Wetherbee, who is significantly older than her, can be seen kissing Johnson, 23, who is suspected to be under the influence.

Once the man realizes she is recording them, he questions her about it.

Johnson tells him she is not.

“Then what is this? Tell me the truth. What is this?” he questions again.

He then grabs her phone and turns off the stream.

“Now we’re going back to us. I’m hijacking your phone,” he says.

In a second Instagram Live, he pleads with her to “turn it off.”

“Lia, I need this not to go out, because it will affect my work, please.”

According to Dexerto, it is believed that fans who viewed the stream called the police.

“Fuck all of you, do not send the fucking police to my fucking address,” Johnson previously said during the stream.

In another Instagram Live, Johnson alleges the police showed up to her house and detained her.

“The cops showed up, and detained me, put cuffs on my hands. … There’s no reason to worry, I’m OK. I just want to be left alone,” she says.

I may not understand exactly how you’re feeling, but you’re not alone. You are so important. You aren’t weak or defective to me. There is hope for you to get the happiness and love you deserve. I am here forever and always. No matter how long it takes.❤️@LiaMarieJohnson pic.twitter.com/GSjEzrs54M

Johnson began to trend on Twitter, with fans expressing their concern for her.

“We need to save Lia Marie Johnson before something seriously bad happens. her instagram lives are seriously scary and something needs to happen now. is there anyone close to her i can contact?” Twitter user @2020predicts wrote.

Another called the video “chilling.”

“Lia Marie Johnson is in serious danger…” they wrote.

we need to save Lia Marie Johnson before something seriously bad happens. her instagram lives are seriously scary and something needs to happen now. is there anyone close to her i can contact?

Lia Marie Johnson went live earlier and it is seen that her producer was groping and making out with her while she was under the influence of drugs and alcohol please spread the word pic.twitter.com/fQevQapVIl

can we please stop cancelling youtubers and instead get lia marie johnson the help she needs? she is not ok at all. the man in this video is steven wetherbee, who forced her to make out with him and groped her. this is so heartbreaking and unsettling :( pic.twitter.com/YbQlZ5WmnD

“Lia I need this to not go out because it will effect my work” this is chilling. Lia Marie Johnson is in serious danger… pic.twitter.com/ark150mrTK

I don’t fucking care if y’all stan kpop, Star Wars, mcr, Ariana Grande, or anything else. Please for the love of god spread the awareness of what Lia Marie Johnson is going through. The livestream is so unsettling and it makes me angry. https://t.co/pUonsuq07A

Wetherbee, who reportedly began working with Johnson when she was a minor, allegedly deleted all his social media accounts.

“This man works with children. THAT is why he probably doesn’t want this to get out. THAT is why he deleted all of his accounts and THAT is what makes him a fucking creep. We need him the fuck away from Lia Marie Johnson,” Twitter user @n0str0mo_ wrote.

On Dec. 24, Johnson appeared emotional on another Instagram Live. She told viewers her behavior was the result of an “interesting mindset,” not drugs. She also posted similarly concerning streams over the summer.

Fans reacted similarly online by expressing support and concern for the YouTube star.

Johnson’s YouTube channel boasts 1.8 million subscribers. Her content largely focuses on musical work and vlogging, but she hasn’t uploaded anything since 2018. Her Twitter account, while more recently active, went quiet toward the end of November.