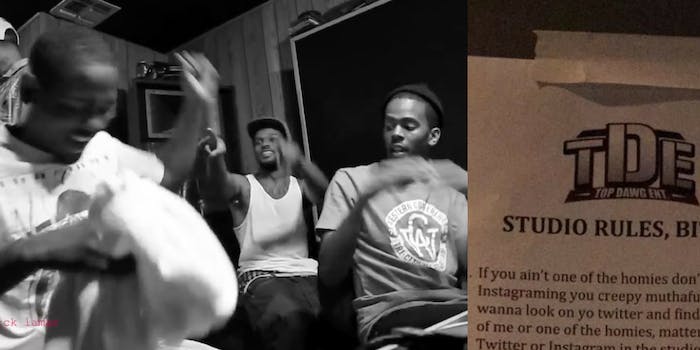 These are the 5 studio rules that Kendrick Lamar, SZA work by

'Shut up and look ugly for the homies.'

Schoolboy Q is clearly one of those guys who would join fight club and then immediately tell someone about it—twice.

On Wednesday, the rapper snapped a glimpse of the studio rules for his record label, Top Dawg Entertainment, which also manages Kendrick Lamar, SZA, other Black Hippy members, among others. However, in sharing them to Snapchat, he kind of violated one of them in the process.

Depicted in a screenshot tweeted by a staffer for Revolt TV, Sean “P. Diddy” Combs‘ music network, the rules are short and simple, following a direct theme of, “if you act cool, then you are cool.”

2017 goals: shut up and look ugly for the homies pic.twitter.com/D2AN3olgLW

The rules read as follows:

OK, so, really there are four rules, but at least you know what you’re in for with the fifth one.

Maybe Q really just wanted everyone to be familiar with the weed guidelines before the next session? At least Snapchat wasn’t targeted on that social media ban.