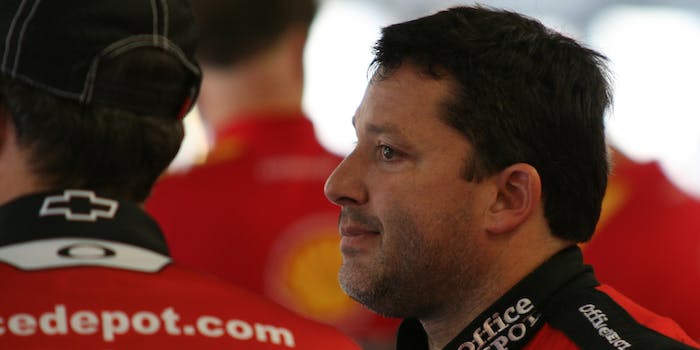 Why is the Tony Stewart video still on YouTube?

When do we not press play?

On Sunday morning, a clip of a sprint car accident at Canandaigua Motorsports Park, involving Tony Stewart and Kevin Ward Jr., went viral. Twenty-year-old Ward ended up dying at the hospital that night, shortly after the accident. In the clip, you can see his body moving until it is not. Millions of us essentially watched his death, over and over.

To watch a death on the Internet has become part of being online. We all make the choice to click play or not, and for many of us, it’s become muscle memory, that acting of saying yes. Still, many people were understandably upset that the footage of his death was “trending,” or playing next to ads, or that they had to watch it at all. How should we feel about wanting to see it?

I watched the video a couple times, each time feeling my stomach sink a bit. What was I getting from the image? I suppose I was trying to give this scene context, like everyone else. To try to make sense of the senseless. Commenters on the video debated what happened in the short scene, who was at fault. It brought out the worst in people, as the Internet does.

We’ve become accustomed to the curiosity gap, but there’s also a morbidity gap. We channel our grief over the death of actors on Facebook and Twitter, unsure of where else to put it. Eric G. Wilson’s 2012 book, Everyone Loves a Good Train Wreck: Why We Can’t Look Away, explored this obsession with seeing what we don’t necessarily want to. He posits that “our attraction to the macabre is on some level a desire to experience someone else’s suffering.” In this Digiday post questioning the wealth of traffic the Ward video brought Deadspin, author Brian Morrissey writes, ‘[the] line between what constitues news and what is essentially a snuff film is fuzzy.”

To watch a death on the Internet makes us angry, and it should. We watched the video in which no one attempts to resucitate Eric Garner. The image of 18-year-old Michael Brown lying in a pool of blood after being shot by police in Ferguson, Mo., has been widely circulated and repurposed. In her new book, Bad Feminist, Roxane Gay discusses the 2010 rape of an 11-year-old girl in Cleveland, Texas, and the images that came with it:

“There is video of the attack because this is the future. The unspeakable will be televised.”

And we want to see the unspeakable.

The Canandaigua video now has a warning and has been age-restricted, in accordance with YouTube’s community guidelines. One of those guidelines advises, “Graphic or gratuitous violence is not allowed. If your video shows someone being physically hurt, attacked, or humiliated, don’t post it.” Above these guidelines, it says, “Don’t cross the line.”

Of course, videos cross the line all the time. The volume of videos uploaded to the site far exceeds the number of filters, or people “flagging” videos. Now that it’s age-restricted, the Canandaigua clip won’t have ads, so it won’t be generating revenue. When asked if they would be taking the video down, a YouTube spokesperson told the Daily Dot:

First of all, our hearts go out to Kevin Ward Jr.’s family at this time. While YouTube’s Guidelines generally prohibit graphic or violent content, we make exceptions for material with documentary or news value. In cases where a video is not suitable for all viewers, we apply warnings and age restrictions to safeguard people using our site.

A second video of the accident is now being analzyed by police. We only saw a minute of Ward’s story. We did not know him, but we mourned as if we did, sending thoughts and prayers to a stranger’s family. This piece from Jay Busbee perhaps drives home the weight of this sad tale, which gives the video even more emotional heft. Stewart, a NASCAR star, raced with Ward, a small-town kid who’d been racing in some form or another since he was 4. This story is almost Southern gothic.

“Maybe one day years from now he’d have reached NASCAR’s highest levels; maybe he’d just be sitting around the local garage, telling the same story over and over about the time he raced Tony Stewart. He should have gotten the chance to go as far as his talent and drive would have taken him. He didn’t get it. This is beyond unfair.”

To watch a death on the Internet takes almost no effort. Does that make it fair?