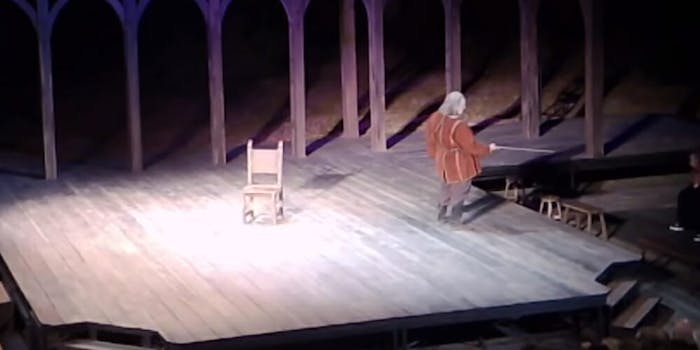 The man is a national treasure.

It’s been said many times about Tom Hanks, but it’s worth mentioning again. The man is a national treasure.

When he’s not speaking out against the awfulness that is Hollywood and buying espresso machines for presidential staffs, the Academy Award-winning actor is entertaining the masses and driving considerable audiences to see theater productions of Henry IV in the year 2018.

Hanks continued his trend as the “nicest guy on the planet” during a recent performance of Henry IV after an audience member fell ill in the middle of the show and needed medical attention. Being a real pro, Hanks ad-libbed for over five minutes while staying in character and the audience enjoyed a free presentation from an acting legend in a fat suit.

Hanks went so far as to pull audience members onstage to join in the lunacy and chastised those who left the theater—possibly to keep from being brought up or just to use the lavatory—calling those patrons “scurvy rogues” and “insults to all actors and Shakespeare himself.”

Hanks and the show ended their month-long run of Henry VI on July 1, so we all missed our chance to watch Mr. Nice Guy perform or to pass out in a theater. But the clip, which went viral Tuesday on Reddit, will live on as a testament to Hanks’ sheer humanity.