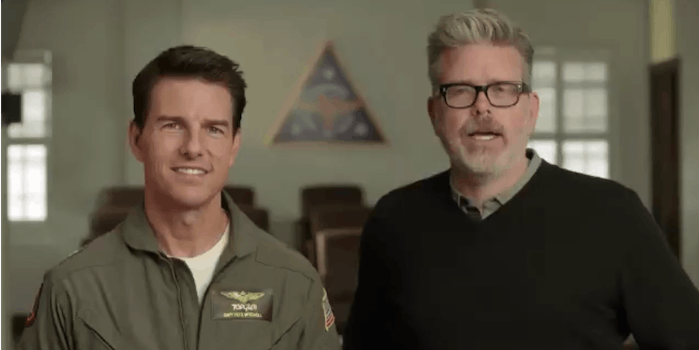 Everyone is digging Tom Cruise’s PSA about motion smoothing

You've never heard of motion smoothing—but it's affecting the way you watch.

Tom Cruise got together with Mission: Impossible Fallout director Christopher McQuarrie to deliver an important message about something you’ve never heard of—and the internet loves it.

Motion smoothing, also known as video interpolation, is a digital effect included on your home television that may be making your film-watching experience less than ideal. Luckily, Cruise and McQuarrie stood side-by-side on the set of Top Gun Maverick to inform the masses about this effect, and how to disable it should they so choose.

I’m taking a quick break from filming to tell you the best way to watch Mission: Impossible Fallout (or any movie you love) at home. pic.twitter.com/oW2eTm1IUA

Cruise tweeted the PSA on Tuesday, and in the video, he and McQuarrie discuss the reasoning behind motion smoothing, and how interested viewers can turn the effect off to better enjoy their films. Motion smoothing “makes most movies look like they were shot on high-speed video, rather than film,” Cruise explains.

Perhaps it’s the legitimately helpful information—or maybe it’s just the Cruise of it all—but people on Twitter are digging the short, informational PSA.

Is it bad that Tom Cruise getting rid of motion smoothing on HDTVs is the impossible mission I’m MOST excited about? https://t.co/N2FI92ury9

I guess this means I would watch a whole movie of Tom Cruise explaining frame interpolation because that was a goddamn delight.
What is this new genre of video? I'm here for it. 100% https://t.co/QyZ5nwHbir

Hey @chrismcquarrie and @TomCruise – I WILL BE YOUR WINGMAN ANYTIME https://t.co/WKnNkmXu5v

Yes. Yes. Listen to Cruise!!! This is drives any film maker crazy. Thank you @TomCruise and @chrismcquarrie.#RespecttheCruise https://t.co/EfxFdRxauH

“Most HDTVs come with this feature already on them, by default,” Cruise says in the video. “Turning it off requires navigating a set of menus with interpolation often referred to by another brand name.”

Cruise is correct. Motion smoothing—often referred to as the “soap opera effect”—is intended to “reduce motion blur in sporting events and other high definition programs,” and according to McQuarrie, goes by a number of different names. On an LG TV, motion smoothing takes on the name TruMotion and can be found under picture options in the menu. For a Samsung TV, you want to look for Auto Motion Plus, and on a Sony, you’ll find it disguised under the name MotionFlow.

Turning off this effect is an easy process, once you know what you are looking for. Those who watch a lot of live sports might want to take note of where it is located, so they can find it next time their team plays. Anyone else will likely never miss the effect, but they will notice its absence next time they watch a film.