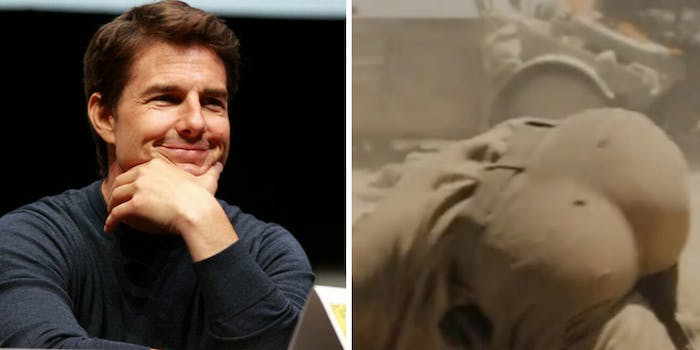 Do NOT question Cruise's bulbous buns.

If you’ve ever seen the Tom Cruise World War II flick Valkyrie, you might have noticed a moment when Cruise’s butt was looking its most bulbous. His character, German officer Claus von Stauffenberg, had fallen after an explosion, and the camera, for about a second, caught one of Cruise’s best assets.

Lookin’ good, right? Except there’s apparently been a lingering controversy about whether Cruise’s curvy caboose was the real thing. Or whether he was wearing an ass prosthetic.

hello, please, i present the theory that for one single shot in Valkyrie (2008), at 5:12, tom cruise wears a fake butt. observe: pic.twitter.com/Tw6yTbsQUe

he does his own stunts, people wear ass pads all the time, but it's the SHEER EXTREMITY of the rump's robustness that jacks this up

The Twitter account @iluvbutts247 was so intrigued by the prospect of a fake fanny that he commissioned this poll to determine if, no matter what ZZ Top says, Cruise’s tush was too much.

but is it TOO juicy?

Finally, Cruise was asked about this, and even though this is a manufactured controversy in 2017 about a single scene from a movie that was released nine years ago, Cruise felt compelled to respond to the rear-end controversy.

“I have no idea. There was no prosthetic in Valkyrie. No,” Cruise told Screenrant.

Cruise apparently was unaware his tuchus had become a meme, and it’s become newsworthy (OK, slightly newsworthy) because in his new film, American Made, there’s a running joke about Cruise mooning his family whenever he leaves town. Cruise contends that ass belongs to him, as well.

That, of course, is a great relief, because, as we all know, there’s absolutely nothing worse than knowing about an imposter posterior.

When reached for comment about Cruise’s denial, @iluvbutts247 told the Daily Dot the following:

“I think if Tom Cruise wants to sit on prosthetics and call himself thicc, he has the right to give it a try, but there’s no requirement that I enjoy sitting here listening to people lie. This ordeal has part of my attention—it has the minimum amount. The rest of my attention is back at the offices of ILuvButts247, where my colleagues and I are doing butt things that no one in Hollywood, including and especially Tom Cruise’s flat ass, are physically or thickly capable of doing. “