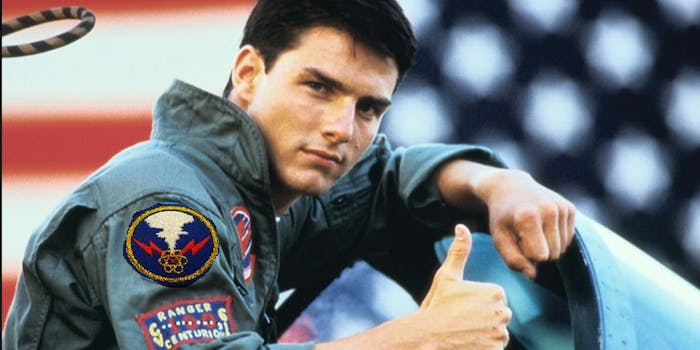 Sorry, Goose, but it's time to buzz the theater.

The internet has been rejoicing ever since Tom Cruise confirmed there will be a sequel to Top Gun after all on Wednesday, during an interview with the Australian morning show “Sunrise.”

When asked about the plans, the star of the original movie said “It’s true” several times, and said shooting would probably begin in the next year.

“It’s happening. It is definitely happening,” Cruise said. “You’re the first people I’ve said this to.”

Ever since the announcement went viral on Twitter, users everywhere have shared their opinion about the new movie. While many individuals were excited, others felt the sequel comes too late and is unnecessary.

Does the world really need a Top Gun 2? Can't we just get the Kenny Loggins soundtrack and call it a day?

Most of the details of the film remain unclear, since original director Tony Scott passed away in 2012. That hasn’t stopped the internet from hypothesizing what will happen. Will Maverick return to the Navy and fight Russians? Or will he battle rude United Airlines flight attendants?

#TopGun2 is Maverick in his post flight career as a Ejection Seat Safety inspector.

I like the recommendation that Top Gun 2 involve Maverick trying frantically to reboot his F-35 before it hits the ocean.

Top Gun 2 should essentially be Grumpy Old Men with drones.

What if plot of #TopGun2 is just a 5 minute short film with Tom Cruise firing a nuclear LRSO and then 4 minutes of Kenny Loggins? pic.twitter.com/xvNGIr998y

Everyone can agree drones will definitely play a role in Top Gun 2. Producer Jerry Bruckheimer told HuffPost in 2014 he plans to pit Tom Cruise against drones.

“The concept is, basically, are the pilots obsolete because of drones,” Bruckheimer said. “Cruise is going to show them that they’re not obsolete. They’re here to stay.”

Until filming begins, it looks like Cruise is keeping busy. His newest film, The Mummy, hits theaters June 9. Cruise’s upcoming films also include Luna Park, American Made, and Mission: Impossible 6.