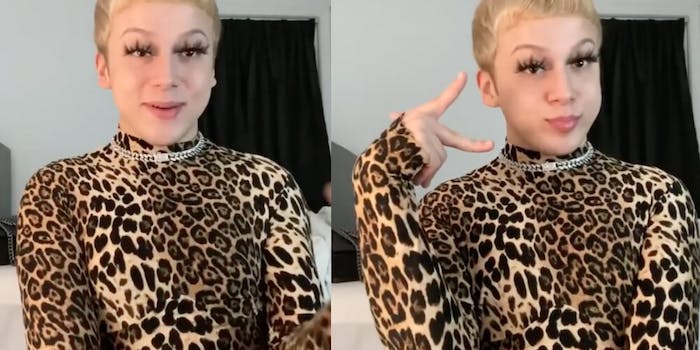 Timmy Thick blasted for saying the N-word in comeback video

'Timmy Thick saying the N-word. Harvard needs to come get him.'

Timmy Thick took a social media hiatus in 2018. Now he seems to be back and is stirring up controversy by saying the N-word.

On Saturday night, Timmy Thick posted a comeback video to Instagram. In the video, the internet personality can be seen twerking and then proceeding to answer commonly asked fan questions.

“I can’t go nowhere, the mall, the movies, nothing, without a group of five, six females, or [N-words], it don’t matter, coming up to me,” Timmy Thick says in the video.

He was answering a question about whether a fan has ever asked for a picture while he’s in public.

While many were excited by Timmy Thick’s return, some couldn’t get over the fact he said the N-word while making it.

DID TIMMY THICK JUST COME BACK FROM THE DEAD TO SAY THE FUCKINF N WORD WHAT IM FUCKITN LAUGHING SO HARRD RN WHATT BE FUCK HAJJSJJSKEMMDSJKWJEKEJAKSNNE https://t.co/NYCU7bvAc8

Timmy Thick has never been one to shy away from controversy. In 2018, he made a dubious claim that he was a social experiment conducted by Harvard.

“Good Evening, ‘timmythick’ was a 24 month sociological study conducted by Harvard University. We are now complete with our study. Thank you for your time,” the tweet read at the time.

Babe.net seemingly debunked the outlandish claim by speaking with a sociology professor at Harvard, Jason Beckfield. Beckfield told the outlet that “there is no such Harvard study” in regard to Timmy Thick.

At the time, Timmy Thick’s Instagram account also disappeared, according to the Daily Mail. Whether Timmy Thick was banned, deleted, or simply deactivated it is unclear. It is also unclear whether the Instagram account he posted his comeback video to has the same or different username as one of his old ones. The account contains no other posts.

Timmy Thick joined Instagram in 2016, where he amassed a large fanbase that seemed to follow him from account to account. He was banned several times throughout his two-year stint for posting “inappropriate” content, but he never had any problems starting new accounts and gaining followers again. He later created his Twitter account in 2017, where he also amassed a large following.

We have likely yet to see the last of Timmy Thick. He captioned his Instagram post, “STAY TUNED.” But, in the meantime, there’s another theory as to why Timmy Thick made his comeback at this point in time.

“The FBI released timmy thick to distract us from the epstein case,” Twitter user @BillRatchet wrote.

The government cloned Timmy thick to distract us from Jeffrey Epstein