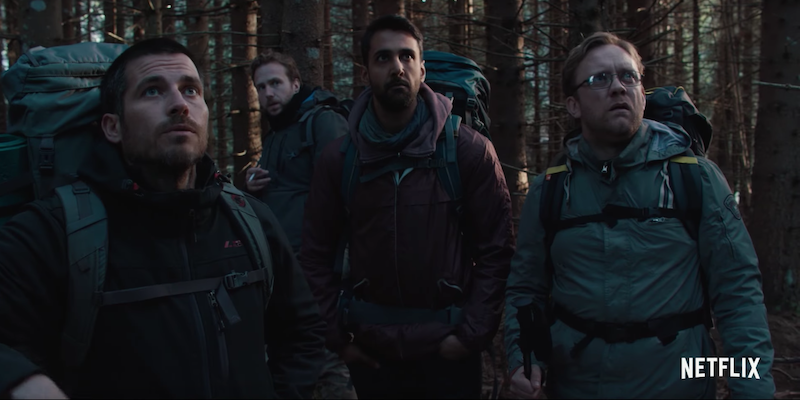 Netflix horror flick ‘The Ritual’ gets lost in the woods

In this spooky hike, the scariest moment happens at the beginning.

In Netflix horror movie The Ritual, the scariest moment of all ends up being the one that sets the film in motion.

It’s not even a traditional horror beat, really, having none of the supernatural creepiness which the movie goes on to revel in. It’s a scene that’s disturbing on a psychological level, and it works so well that the rest of the film suffers as a result. All the other twists and turns The Ritual takes end up playing second fiddle to the brief bit of human brutality that all the ensuing action is predicated on.

The movie stars Rafe Spall (Life of Pi, Hot Fuzz), Robert James-Collier (Downton Abbey), Arsher Ali, and Sam Troughton as four English lads on a boys’ trip, hiking in Sweden after a recent tragedy. One of the men hurts his foot, sending them off the main trail and onto a shortcut through the woods. The movie is essentially a mythological riff on Deliverance, though there’s another title which I suspect may come to mind for British horror aficionados and fans of American camp classics.

The Ritual has many touches which are genuinely creepy, and the last 30 minutes or so deliver just enough spooks to make it worth watching. The irony of the location is that the dark, ominous woods the characters are trapped in afford director David Bruckner the opportunity for some gorgeous shots. Images of the country and hillside are casually stunning. (The film was shot in Romania.) The cast all do a fine job as well, with Spall continuing to prove that he’s a solid British everyman, and James-Collier showcasing a charisma beyond what he got to do as Thomas on Downton.

The Ritual is too flat, however, to the point of being forgettable. There’s nothing about this movie which elevates it beyond that excellent inciting incident. The depiction of male camaraderie is believable, and the scares are suitable, but it’s all stuff you’ve seen before. This is disappointing, as Bruckner’s previous films The Signal and Southbound, in addition to his entry in the horror anthology V/H/S, all show an originality which is lacking in The Ritual. For the first time in his career, Bruckner is working from a script here he didn’t write. The Ritual was penned by Joe Barton (Humans), based off a novel by Adam Nevill. It’s unclear if something was lost in translation.

To its credit, the ending of the film is not hopeless. For a while now, popular horror movies seem to have taken the position that it’s better to finish bleak and go fatalist with the closing message. That’s basically fine, but part of the reason that something like Get Out resonated is that it afforded audiences much-earned relief.

The Ritual is just entertaining enough, and that’s the problem. As many have recently pointed out, Netflix doesn’t appear to care if a movie is mediocre or bad. As long as you’re watching, a reaction of “meh” is a passing grade. Whether this approach serves talented voices like Bruckner, on the other hand, is questionable.