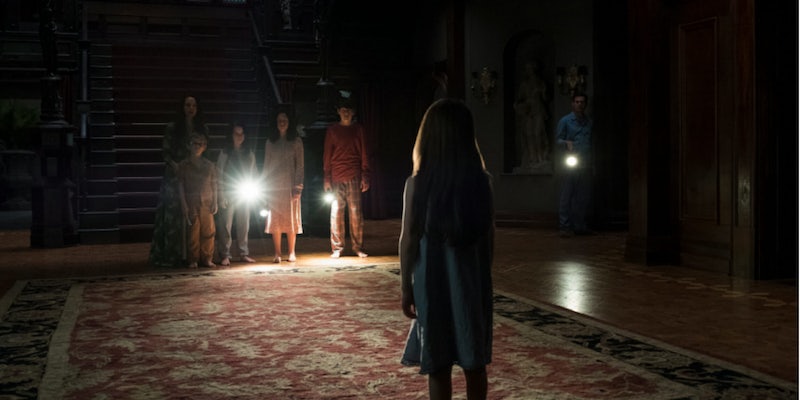 All the ghosts hiding in ‘The Haunting of Hill House’

The ghosts are always watching. Did you notice?

The Haunting of Hill House has become a Netflix hit, a slow-burning exploration of generational trauma and haunted childhoods. It’s inhabited by both literal and figurative ghosts.

Much of the narrative action takes place in flashbacks to Hill House, the cavernous mansion where the Crain family once lived. Director Mike Flanagan has remarked on how difficult it is to consistently scare people over the course of a 10-episode series, and while there are some jump-scares, much of the horror comes from the barely perceptible ghosts lingering in the background.

Flanagan told Vulture that they “hid dozens of ghosts throughout the series, in plain sight, in the deep background of shots. We don’t call any attention to them, but they’re there. If you look in a door frame, or under the piano, or behind a curtain in a lot of otherwise ordinary scenes, you’ll see someone there.” However, he told Variety that he used 70 to 80 ghosts in background scenes.

With that in mind, here are all the ghosts hiding in the background—at least that we could see—in The Haunting of Hill House.

All the ghosts in The Haunting of Hill House

In “Steven Sees a Ghost,” eldest son Steven is the first Crain child we see being spooked at Hill House. But first, some establishing shots of the house, including one of a staircase and… a ghost peering out from the railing.

One also appears behind Steven when his father is investigating something in the hallway.

And again when he and his father run down the stairs. (Actually, there are two this time.)

A face appears behind Olivia when she enters the kitchen.

When Shirley walks in on her mother sketching out some blueprints for the house, there’s something in the garden.

The ghosts don’t stop at just background work. In episode 2, something plays with Olivia’s hair.

When Theodora walks into the kitchen to see her younger brother and sister playing with a vintage intercom system, there’s a face in the upper right-hand corner.

When Theo and Luke leave the kitchen, there’s one peeking out from behind a door, though they don’t see it.

The dumb waiter becomes a source of curiosity for the Crain kids, even though it’s definitely haunted. After Theo agrees to let Luke venture into it and he becomes stuck, a wide shot shows someone in the dining room.

Theo goes rooting around to find the basement, and ghosts are everywhere. One is standing behind her (you can only see its arm). Another is peering out from the very creepy basement that no one should—goddammit, Theo’s going in there.

When the touch-sensitive Theo gets a glimpse of her mother’s future, a pale-armed figure can be seen behind Olivia—perhaps the same one from the dumb waiter wide shot.

As Theo walks through the kitchen, an Uncle Fester-looking guy is standing in the hallway.

When Olivia beckons her daughter to the dining room table, a pale face can be seen in the second archway.

Though it happens quickly, there’s a man behind a red lamp in this shot.

We know that Luke has been haunted by an unnaturally tall man in a bowler hat since childhood. When Luke runs out of the room after his father gifts him a bowler hat, you can see a possibly bow-tied figure in the right-hand corner.

A pale figure can be seen in the hallway as the Crains unpack, and it could be the same one glimpsed in episode 3.

A pale face is reflected on the cabinet behind Luke and Nell.

Just as Luke has been haunted by a man in a bowler hat, his twin sister Nell has been haunted by “The Bent-Neck Lady.” We see a few chilling shots of her, but this episode ups the stakes by placing a ghost under the piano. (You can just see the hands in the bottom left corner.)

An Easter egg inside an Easter egg, the ghost to the left of Olivia’s head in this shot is Bruce Greenwood, who played Carla Gugino’s husband in Flanagan’s 2017 adaptation of Gerald’s Game.

We don’t see that many present-day ghosts, but in this standout episode, which unravels in one long, unbroken shot, the family comes together for Nell’s funeral. And Nell shows up too.

There are a couple shots of ghosts hanging around in the basement as Hugh tries to figure out what’s behind that wall, including this quick shot of a pale face behind a pillar when he’s trying to break through. It certainly looks like the pale, longhaired woman from previous episodes.

Could that be her hand behind the officer in the background?

When Hugh tries to break into the Red Room, a figure is suddenly watching from the room behind him.

Just a normal day at Hill Hou—wait, nope, there’s a terrifying face in the window.

When Hugh takes a sleeping Luke to bed, someone is watching from the archway.

Is it the same person who’s watching from the staircase when Olivia leaves on a mental-health break?

The series comes back to present-day Steven in the finale, and the ghosts that linger (in those archways).

Did we miss any ghosts?