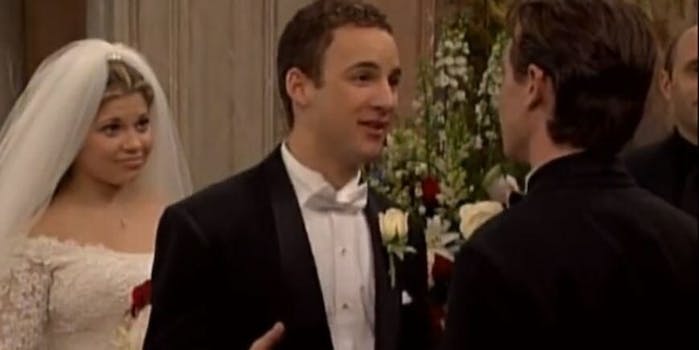 The creators of 'Boy Meets World,' 'Family Matters,' and 'Sabrina' remember an era.

Before streaming allowed us to watch TV whenever we want, Friday nights used to be the sweet spot. If you were a kid in the ’90s, you waited for ABC’s TGIF lineup and its buffet of sitcoms. It was anticipation TV.

Hulu is now home to several of the shows from the classic lineup, which you can watch whenever you want: Boy Meets World, Step by Step, Family Matters, Sabrina the Teenage Witch, Perfect Strangers, Full House, Hangin’ with Mr. Cooper, and Dinosaurs. On Friday night at the ATX Television Festival, Boy Meets World star Ben Savage and creator Michael Jacobs were joined on the couch by Sabrina creator Nell Scovell, Family Matters star Kellie Shanygne Williams and Family Matters/Step by Step creator William Bickley, to discuss the rise and fall of appointment TV, a term Scovell says “just no longer applies.”

Scovell and Amy Heckerling were the only two female creators in the classic TGIF lineup, but she says she was heartened when Murphy Brown won an Emmy and that other shows created by women were nominated too; it was a sign that maybe they “solved it,” referring to more representation on and behind the camera. “But we really slid back,” Scovell said. “It feels like a rerun.”

The majority of shows in the TGIF lineup were about families or relationships, and it was rare at the time to see a show about a black family. Bickley recalled the criticism he received for being a white guy making a show about a black family, but Williams, who played Laura Winslow, said the show was “a real family. You don’t have to be black or white to understand that.”

ABC recently lost another show about a family, Roseanne, and it was one instance where a reboot probably wasn’t the best idea. Savage, who played Cory Matthews on Boy Meets World, commented on how quickly a show can be elevated or destroyed now by social media—or abruptly canceled by a streaming platform if it’s not performing well. “Shows take a minute to work themselves out,” he said.

“Are you saying you were on a show that was pulled early?” Jacobs joked of Girl Meets World, the spinoff that ran on the Disney Channel from 2014-2017. He later joked about how he would read all the tweets about Girl Meets World, which developed a vocal fandom online and would often get upset that “surferperv24 didn’t like the show.” There was also discussion about how that show’s young stars are more under the microscope than Savage was, and how the relationship between Cory and Topanga (Danielle Fishel) has evolved over the years. “The art of a relationship is in its conversation,” Jacobs said.

According to stats sent out by Hulu, 60,000 subscribers binged all 60 hours of Boy Meets World, and people often binged all nine seasons of Family Matters in a month. That’s some good engagement with muscle memory, or perhaps people are coming to these shows for the first time. Bickley said early in the panel that he thought the TGIF era “was the end of the era where families watched [TV] together.”

Some of the shows have been updated: Girl Meets World in 2014, Fuller House in 2016. And now Sabrina is getting a dark backstory at Netflix, which Scovell is into. She recounted how, before Sabrina, she did a pilot for the WB. Buffy the Vampire Slayer was sharing the office, and she thought the script was amazing. When she heard about the Sabrina reboot, it “made me smile.”

As for its new home on Hulu, Bickley said he hopes “people watch these shows and have a little more hope about life.”