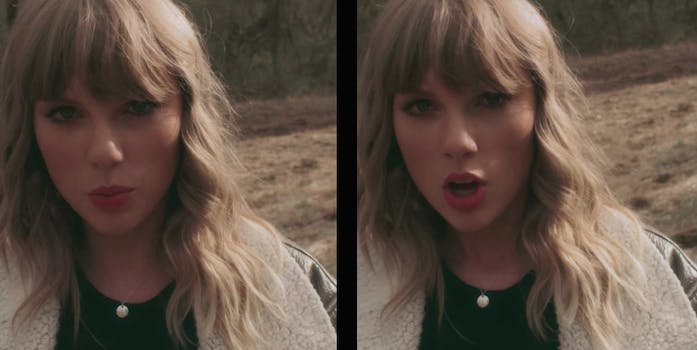 The pop star announced Thursday that a Spotify-only visual would be dropping at midnight, and after some slight technical difficulties, the clip has arrived as promised. In the phone-friendly vertical video, Swift lip-syncs directly into the camera, spinning and smiling in what looks like a park or backyard.

The clip is un-screenshottable from a phone, which is interesting. Any attempts to capture a still while it plays on an iPhone are rendered black, though Spotify’s branded pause button and the song info make it through. It makes this version of “Delicate” truly feel like a burn-after-reading, for-true-fans-only love letter. (You can still capture screenshots through Spotify’s desktop client, though, don’t worry.)

Vertical video for #Delicate out now. Only on @Spotify ✨ https://t.co/ZHvrH7k1PN pic.twitter.com/nhcfIv97gR

The video is tied to Spotify’s “This Is Taylor Swift” playlist, a catalog the company is finally able to highlight after Swift ended her years-long standoff with the streaming service in 2017. And the custom video seems like an act of good faith—it’s unlikely she’ll pull her catalog anytime soon if she’s doing branded partnerships with them.

Swift caught some flack for the original “Delicate” video earlier this month when some eagle-eyed fans pointed out its similarities to a 2016 Kenzo ad. Almost by design, it seems, this alternate clip is pretty criticism-proof.