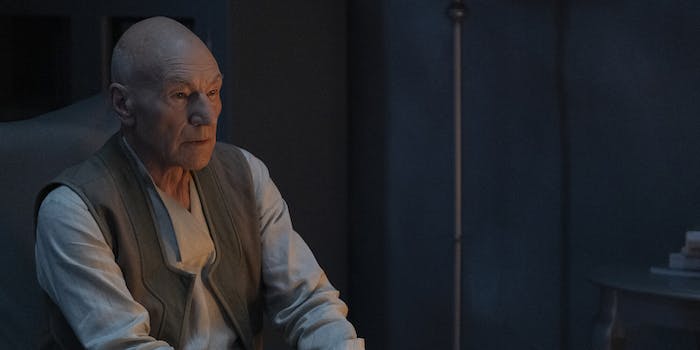 The season 1 finale is a mixed bag, with a beautiful role for Patrick Stewart but a very rushed plot.

Our season ends with a moving role for Jean-Luc Picard—and an extremely patchy conclusion to the android apocalypse storyline, which abruptly stopped making sense last week. After building up a nuanced allegory about the oppression and alienation of synthetics like Soji, episode 9 saw her join forces with her evil twin Sutra, building a beacon to summon a race of ancient robots to wipe out all biological life. In doing so, they prove the Zhat Vash right: synthetics really are an existential threat, and the only solution is war. This more or less works as an X-Men-style political narrative, with Soji and Sutra as the Magneto to Data’s assimilationist Professor X. But the whole thing takes place over the course of like 24 hours, relying on Soji to completely realign her moral compass multiple times.

This is Star Trek, so the eventual solution is peaceful negotiation and an appeal to Soji’s empathy. But the road to that conclusion is a bumpy one. The episode begins with the main cast in several different factions: Picard imprisoned by the synthetics, Raffi and Rios on La Sirena, Elnor and Seven of Nine on the Borg Cube, and Narek fleeing the synthetic prison to sneak into the Cube, where he meets up with his sister Narissa. (Seven later kills Narissa by kicking her off one of the Cube’s non-OSHA-compliant walkways; a fitting end to a fun but one-dimensional villain.) Soon enough, we see some unlikely team-ups. Narek joins La Sirena’s crew to infiltrate the synthetic settlement and blow up Soji’s interdimensional apocalypse portal. Meanwhile, Jurati springs Picard from jail, stealing La Sirena to fly into orbit and confront the entire Romulan fleet—first tricking them by artificially multiplying La Sirena into dozens of fake ships, and then delaying them until Starfleet can arrive, led by another delightful cameo from Will Riker.

Picard‘s final two episodes were co-written by showrunner Michael Chabon and director Akiva Goldsman, and Part 2 is no less rushed than Part 1. While earlier episodes drew a thoughtful and plausible picture of the Federation backsliding into selfish isolationism, the finale requires the synthetic characters (including Soji) to rapidly change their minds twice about whether they want to commit galactic genocide. I say “they,” but the decision is really all about Soji, with Sutra conveniently deactivated halfway through thanks to Altan Soong basically… switching her off. Apparently he can just do that! Anyway, the other synthetics literally do not participate in the moral debate about whether to summon their evil overlords. To be honest, Soji barely even does.

The whole premise of the show is that fear drives people to do terrible things, but the finale doesn’t fully acknowledge the impact of Soji’s plan. You can certainly understand her wanting to strike back against the Romulan fleet, but the show frames this as a struggle against “becoming what the Romulans fear.” Neither she nor Picard fully admit the breadth of what she’s planning to do: Kill billions of people including Picard and the harmless child she befriended like three episodes ago. I can believe this choice from the other synthetics (who have never left Coppelius and are, in Picard’s words, like children), but it doesn’t make sense for Soji, who lived for three years as a human. And the other synthetics don’t have personalities or meaningful dialogue, which undercuts the argument that they’re just as “human” as the organics.

Picard gets to deliver several beautiful speeches though, which is obviously the highlight of the episode. “To say you have no choice is a failure of imagination,” he tells Soji. “Fear is an incompetent teacher,” he explains later. His words do eventually break through, with Soji choosing at the last minute to shut down the interdimensional portal, which had just started to spew malevolent robotic tentacles. (Of course it was tentacles, of course.) She realizes she doesn’t want to kill everyone after all, an about-face that the other synthetics accept with silent agreement, because they seemingly have no opinion either way. A massive fleet of Federation ships escort the Romulan fleet away, leaving La Sirena’s crew to pick up the pieces… at which point Picard succumbs to the strain of his neurological illness, and passes out. Soji beams him back to the planet just in time to speak with his crew, dying in Raffi’s arms.

Even if you weren’t aware that he’d be back for season 2, the episode already sowed the seeds for Picard’s resurrection. Jurati managed to download his mind, allowing her and Soong to transfer his consciousness into an identical synthetic body. (Amusingly, Picard looks briefly annoyed when they assure him they didn’t give him any superpowers like Soji.) But before that happens, he speaks to Data one last time. After his “death,” Picard wakes up in a simulation of his house in France, joining Data for a fireside chat. Apparently Data’s memories were also recovered and stored, allowing Picard to finally tell him that he loves him. Then Data asks for his consciousness to be shut down: Closure for both characters, and for the many fans who disliked Data’s original death in Star Trek: Nemesis.

Will season 2 acknowledge the fact that anyone can now be made immortal with a new synthetic body? Maybe, maybe not. But with Picard back in action, we end season 1 on a traditional note, with La Sirena’s crew flying off into the great unknown: Picard, Soji, Raffi, Jurati, Elnor, Rios, and (an unexpected gift!) Seven of Nine.

Jeri Ryan has easily given one of the show’s best performances, a gritty continuation of Seven’s role in Voyager. She’s also just unbelievably cool, swaggering into every scene in a cloud of charisma. And the finale confirms the subtext of episode 5: she’s definitely queer. It’s a slightly weird reveal though, because after seeing Rios and Jurati share a kiss (a relationship that leaped from “forgettable one night stand” to “actual couple” with virtually no buildup), the camera pans round to show Seven and Raffi holding hands. I mean… sure? It felt like a bit of a last-minute addition because they’ve barely even shared a scene, but maybe Seven and Raffi will be a key relationship next season. All in all, a rather mixed bag of a finale, encapsulated by my final thought as the credits rolled: Where is Narek? I guess they just didn’t bother to show what happened to him.