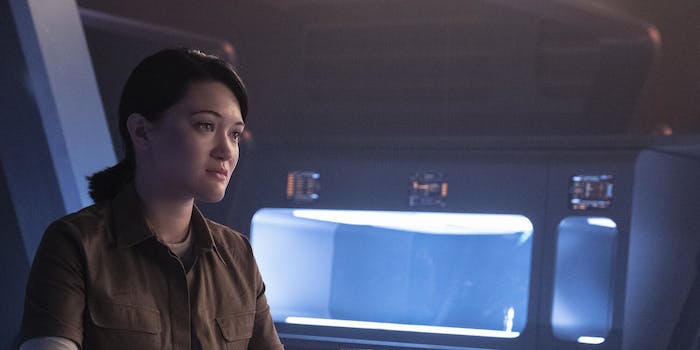 Picard's political message comes to the foreground as we learn the truth behind the Zhat Vash.

Star Trek: Picard has more in common with Discovery than you might think. Picard hews closer to a modern prestige TV format, and it’s better at handling Star Trek‘s political messaging, but both shows are noticeably (and controversially) dark by Star Trek standards, shifting away from comedy and warm, casual teamwork between the main characters. That’s good news for Patrick Stewart as a dramatic actor, but it ultimately makes the show feel less unique in the current trend for plot-heavy, serialized dramas. And like Discovery, Picard‘s main storyline has been building toward a Big Reveal—something that worked better than I hoped, because it’s not actually a twist.

Episode 8 clarifies the motives behind the Zhat Vash‘s obsessive hatred for androids, but instead of dramatically unveiling a man behind the curtain, it mostly builds on stuff we already knew. From the first couple of episodes, we’ve known a) that Picard is about paranoid bigotry, and b) the Zhat Vash are motivated by an ancient fear of synthetic life. Also, you don’t need to be Sherlock Holmes to figure out the Zhat Vash were probably behind the attack on Mars. So this episode is more about theme than plot, illuminating why the Zhat Vash’s role is so politically relevant to our times.

With Soji onboard La Sirena, tensions rise among the crew. Rios locks himself in his quarters, piquing Raffi’s curiosity as an investigator. Why is Rios so freaked out by Soji, someone he’s never met before? After interviewing each of Rios’ holographic companions (all of whom include elements of his personality and memories), she figures out it has something to do with his sudden departure from Starfleet. Finding him sitting in his quarters drinking alone, she finally gets an explanation: he quit Starfleet after a nervous breakdown, caused by his beloved captain on the U.S.S. Ibn Majid. During a diplomatic mission, his captain assassinated two civilian envoys for no apparent reason and then killed himself. The planet in question was (unbeknownst to Rios) Bruce Maddox’s adoptive home, and the assassination orders came straight from Starfleet Intelligence. The two people he killed must have been synthetics because one of them looked just like Soji.

Drawing on her own long-held conspiracy theories, Raffi arrives at the truth: the Zhat Vash operate from an octonary star system (that means eight suns, just FYI), basing their faith on an apocalyptic fable from “thousands of centuries ago.” Left behind by a long-lost civilization, this story warns of the dangers of AI. Once synthetic life evolves past a certain point, it heralds the coming of The Destroyer. It’s the same name we heard from the Romulan mythologist Ramdha in episode 3, who exploded with visceral terror when she recognized Soji. As Picard puts it, the Zhat Vash believe “Hell will come again” if synthetics like Soji are allowed to survive.

In the episode’s opening scene, we see how this actually works. 14 years ago, Commodore Oh oversees an initiation ritual for women hoping to join the Zhat Vash —a group that includes Narissa and her aunt Ramdha. Referred to as The Admonition, this ritual involves people absorbing a terrible truth by touching a storehouse of preserved memories.” It delivers the same terrifying vision that made Agnes Jurati become a double agent. A vision so disturbing that most of the women instantly go mad, although Narissa is steadfast, telling Oh that something must be done to stop it. That “something” appears to be the attack on Mars, followed by the quest to eliminate Dahj and Soji.

The Admonition reminded me of our own 10,000-year nuclear waste warnings. These messages are designed to prevent future generations from stumbling across harmful nuclear waste, even after our entire civilization has been forgotten. The point is to protect people by instilling a sense of danger, even if you’re not fully able to explain what that danger is, or why people should curb their natural curiosity. In this case, the warning is stunningly effective because instead of relying on specific information, it’s purely emotional. Here, we arrive at the thrust of Picard‘s season-wide arc. The Zhat Vash believe the threat of synthetic life is so awful that any price—including mass murder—is acceptable to prevent it. But they’re not motivated by reliable facts, they’re motivated by fear and hatred.

This method is so effective that it convinced the mild-mannered Agnes Jurati to murder someone in cold blood. But once she actually interacts with Soji, Agnes immediately recognizes her humanity. Likewise, every conversation about Data has emphasized his innocence, his morality, and his essential personhood. When Picard tells Soji about his relationship with Data, it really does feel like he’s describing a son. We’re offered a clear contrast between visceral, irrational terror, and a person who doesn’t present any visible threat. The Zhat Vash are a cult, driven by a shared certainty that Soji is basically the antichrist. And they managed to spread that hatred with the attack on Mars, blaming androids for the deaths of Federation citizens. Unsurprisingly, the villains of this story are, in fact… the villains.

Some Star Trek fans object to Picard’s unflattering depiction of Starfleet, but I’ve never had an issue with it. To me, the show’s “darkness” is only a problem in terms of tone: every main character is weighed down by a traumatic backstory, and there isn’t enough humor to balance out the dystopian elements – something that wasn’t a problem for the war-torn Deep Space Nine. But there’s a long history of Star Trek portraying Starfleet’s dark side, from obstructive admirals to the black-ops unit Section 31. Picard takes things a step further by showing the Federation’s descent into blatant discrimination, but we now have a roadmap for how that happened.

The Zhat Vash poisoned the Federation from within, spreading hatred that expanded from androids to outsiders like the Romulans. Federation citizens now feel comfortable prioritizing homeworld security above the lives of refugees. In turn, Starfleet abandoned vulnerable people in the territories now occupied by groups like the Fenris Rangers. And the Borg Cube—which might otherwise have become a humanitarian project for the Federation—became a Romulan research outpost. The main leaders working to help ex-Borgs were XBs themselves, Hugh and Seven of Nine—who returned this week to commit a tremendous act of self-sacrifice. Plugging herself into the Cube, Seven activates the remaining Borg drones to fight Narissa’s Romulan guards. Seven’s life might not have been so painful if Starfleet had lived up to its former ideals. Even Riker and Troi, in their peaceful and privileged retirement, suffered as a result of the Zhat Vash’s murderous quest. Their son would still be alive if synthetic research was allowed to continue, an unintended consequence that someone like Narissa would deem a necessary evil.