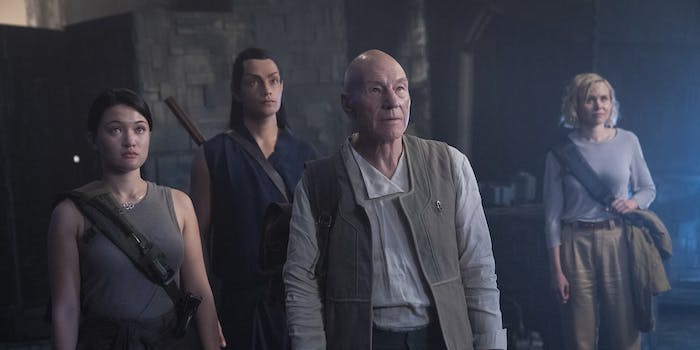 Picard arrives on the planet of the synthetics for a TNG-style adventure.

Star Trek: Picard’s penultimate episode is very Next Generation, which is to say, it’s kind of corny and it culminates in an ethical debate. We begin, however, with a spaceship battle. La Sirena arrives in orbit around Soji’s homeworld Coppelius, closely followed by Narek’s Romulan spy ship. Seven of Nine’s reclaimed Borg Cube appears just in time to intervene, but then they’re all captured by some very cool-looking giant space orchids, which turn out to be the planet’s defense system.

La Sirena’s crash landing puts Picard in sickbay, forcing him to reveal to the crew that he’s terminally ill. This subplot has been kind of a mixed bag so far: a chance for a more emotionally varied performance from Patrick Stewart thanks to Picard’s neurological symptoms, but a narrative dead-end because we know he’ll be back next season. They’re not going to kill off the main character. It did offer a great opportunity for another lovely scene with Elnor though, bidding Picard farewell because Elnor chose to stay behind and help Seven protect the surviving XBs.

Picard and his crew set out to the planet’s main settlement of synthetic humanoids, which is where things get seriously TNG. Based around a generically futuristic cluster of white buildings, the overall vibe is like a less horny version of “Justice,” the TNG episode where Wesley Crusher gets arrested on a planet of sexy idiots in bikinis. Everyone on Coppelius is a synthetic like Soji, and they’re all identical twins, lounging around playing hacky-sack and 3D chess in the sun. Our heroes are greeted by a golden-eyed, golden-skinned woman giving a very familiar type of “I’m a weird peaceful alien!” performance, introducing us to the planet’s only human inhabitant: The son of cyberneticist Noonien Soong, Data’s original creator. He is, of course, played by Brent Spiner, aka Data.

Things start moving fast from here, careening off the rails after last week’s thematically rich episode. Most of the synthetics on Coppelius are basically background extras, but we do meet another Soji lookalike, Sutra. I can’t decide whether it’s retro-cute or just bad that the synthetics’ gold skin makeup looks so fake, but it’s a weird move for a show that otherwise has high production values. It really does just look like they’ve painted their faces gold. Anyway, it’s pretty clear from the get-go that sutra is Soji’s evil twin. She’s also a Vulcan enthusiast who “taught herself the mind-meld,” something that many old-school Star Trek fans will find hard to swallow. Only Vulcans can do it! It’s an innate telepathic ability, not a learned skill!

Technicalities aside, Sutra uses the mind-meld to extract Agnes Jurati’s memories of The Admonition, the terrifying vision that motivates the Zhat-Vash in their crusade against synthetic life. In doing so, she reveals the truth. Organic lifeforms have been misinterpreting the message for generations, because their minds simply can’t digest it. In fact, the message is directed at synthetics themselves, sent by a group of godlike beings who live outside time and space. It’s a warning to synthetics, promising that once they evolve past a certain point, organic civilizations will try to stamp them out. When that happens, the synthetics should “summon us and we will come.” So, the Zhat-Vash are kind of right in thinking that synthetic life will result in the rise of an apocalyptic being who wants to wipe out the organics… but they’re the ones who caused this conflict in the first place. It’s a closed loop, with the synthetic gods interfering with what could’ve been an avoidable war. Phew!

Picard’s crew didn’t even arrive at the Coppellian settlement until 20 minutes into this 43-minute episode, so this is a lot to unpack. The pacing feels uneven this week because we had eight episodes to consider the politics of the synthetic/organic divide, but in the space of 20 minutes, we’re landed with this big revelation about synthetic gods, and a brand new character, Sutra, who is basically a knock-off Magneto. A Romulan fleet is on its way to attack Coppelius, and Sutra already knows what she wants to do: summon the synthetic gods to kill them all.

Narek also crash-landed on Coppelius, so he becomes the synthetics’ first-ever prisoner, leading to a confrontation where he confesses his love to Soji. She, quite reasonably, tells him to get lost. Come on, man! You need to do something to earn her love! And that might still happen, because Sutra sneaks over to the jail cell and frees him in exchange for him performing some mysterious mission on the crashed Borg Cube. Hopefully, he’ll work to save Soji and Picard instead, but for now, his prison break (and the guard’s murder) are very convenient for Sutra. She uses it as proof that organic people are violent and duplicitous, and generally not worth saving from the synthetic apocalypse. We just went from zero to galactic genocide in the space of half an episode! What!?

Picard counters Sutra with an argument for peace, promising to get help from the Federation—which is, I have to admit, not enormously convincing. Obviously, he’s right in saying it’s better for everyone to flee the planet instead of inviting Android Satan to kickstart a galactic war, but it’s not the most reliable of promises. The whole situation feels pretty rushed, with Sutra acting as a bloodthirsty mouthpiece for a crowd of nameless, personality-free androids who don’t express any views on the matter. You’d think there would be more political division among the Coppelians, who were originally so welcoming to Picard and his human crew. But instead, they’re all silently onboard with Sutra summoning an ancient god to murder every organic lifeform in the galaxy? This all seems more like the culmination of a single-episode storyline than a season-long arc.

Next week will wrap everything up, and while I’ve been rooting for a Narek redemption arc all season, I’ll be a little underwhelmed if he saves the day In The Name Of Love while Sutra’s synthetic followers are portrayed as a bunch of airheads who jump on the genocide bandwagon at the drop of a hat.