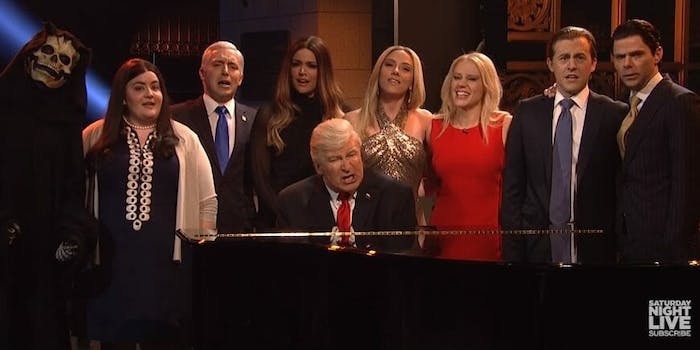 In one of the most poignant moments of season 42 on Saturday Night Live, Hillary Clinton, played by Kate McKinnon, performed a heart-stirring rendition of “Hallelujah” in the first episode after Clinton lost the presidential election.

On the season finale on Saturday night, the cast that spent much of its time blasting Donald Trump throughout the year gathered around the piano to give one more rendition of the Leonard Cohen tune.

And just about everybody’s there, including Alec Baldwin, McKinnon as Kellyanne Conway, Scarlett Johansson as Ivanka Trump, and the Grim Reaper as Steve Bannon. The song—and the performances—is beautiful.

It’s widely assumed Baldwin will retire his Trump character before season 43. If so, this was the perfect way to go out.