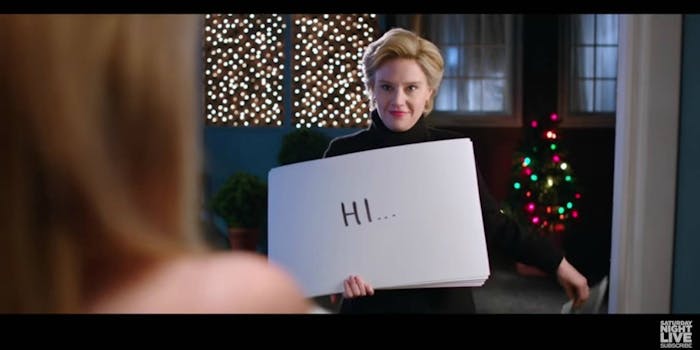 It's worth a shot.

The Electoral College will vote Monday to decide if President-elect Donald Trump, who lost the popular vote to Hillary Clinton by at least 2.8 million votes, actually gets to be the next president.

Celebrities have been begging voters not to put Trump in the White House, while the actual voters have said they want intelligence briefings on the role Russia’s hacking played in the 2016 election.

But what does Clinton, as played by Kate McKinnon on this week’s Saturday Night Live, think about all this? And more importantly, how far is she willing to go to convince Electoral College voters to side with her? Remember this famous scene in the 2003 film, Love Actually? Yeah, so does Clinton.

Hey, it was worth a shot, right?

Correction 9:37am CT, Dec. 19: The original version of this article misstated the year in which Love, Actually was released in theaters. That film came out in 2003.