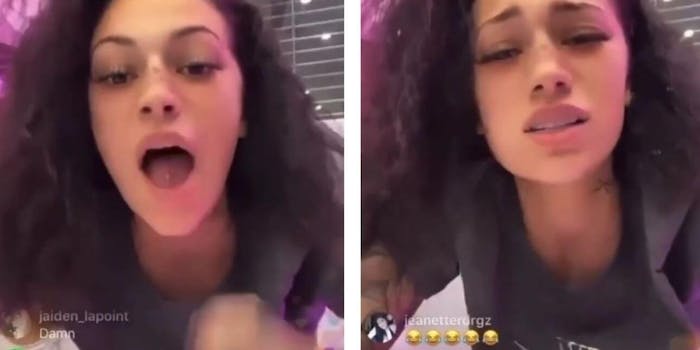 According to TMZ, Jackson, who starred in Jessie and Bunk’d, has taken out a restraining order on Bhad Bhabie, aka Danielle Bregoli. In her explanation, Jackson said she’s scared to leave her house and that she believes Bregoli is mentally unstable.

A judge granted the order, meaning Bregoli must stay 100 yards away from Jackson and her home, and she can’t contact Jackson.

In response, Bregoli posted to Instagram a photo of her gold and platinum records and wrote, “You can try to hate me for responding to bullshit with more bullshit but that’s just who I am and I don’t apologize for none of it. I been in this fake ass hollywood world for 3 1/2 years now and I’ve done ALOT when the whole world said I couldn’t, but I refuse to become as fake as hollywood is. Y’all can play around on your finstas but I’ll always say what’s on my mind as cuz that’s who I am. Go get your restraining order , Imma go get checks.”

The feud seemed to begin when Bregoli accused Jackson of using a fake Instagram account, aka finsta, to talk about her. Bregoli took offense to that, posting an Instagram video in which she said, “Don’t go posting about me on your fake page, bitch. If you got something to say about me, post it on your page. Show me you fucking bold. The bitch got me blocked on Instagram, blocked on Twitter, all type of shit. Bitch, grow up.”

Bregoli, who is 16, then threatened to kill the 17-year-old Jackson.

In an apparent response on Twitter, Jackson listed all of her recent accomplishments and wrote “No time 4 negatives!”