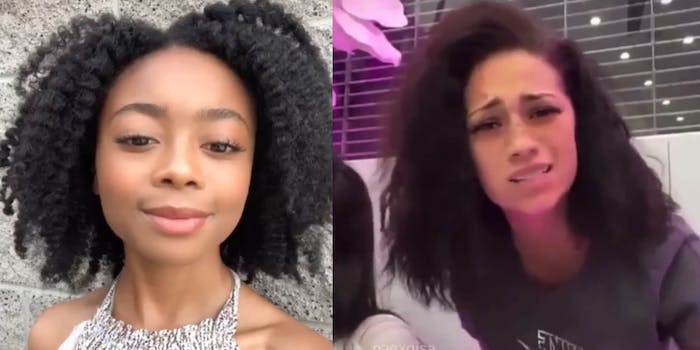 Everyone and their mom is involved, it seems.

Jackson and rapper Bhabie, real name Danielle Bregoli, even got their mothers involved in an Instagram scuffle that, according to both parties, has the potential to elevate to a real-life brawl. Bregoli seemed to fire the first shots, retaliating to Jackson’s alleged fake Instagram (or “finsta”) account, which Jackson allegedly used to post about Bregoli.

“She’s moving sneaky, bro,” Bregoli said on Instagram Live. ” Don’t go posting about me on your fake page, bitch. If you got something to say about me, post it on your page. Show me you fucking bold. The bitch got me blocked on Instagram, blocked on Twitter, all type of shit. Bitch, grow up.”

Bregoli went as far as to threaten to kill Jackson.

“You don’t even know what I will do to you. … I will kill you,” Bregoli said. “I’m finna go to jail behind a Disney thot.”

Jackson seemingly responded on Twitter with a list of her current and upcoming accomplishments, claiming she doesn’t have time for negativity. It’s not an explicit response to Bregoli, but it’s hard to imagine it isn’t directed toward her.

And then their mothers jumped in on the action. Jackson’s mother, Kiya Cole, began a string of comments directed toward Bregoli’s mother, Barbara. Things were pretty heated there, too.

“Bitch!” Cole began. “You ain’t saying nothing but a word! If you want a problem with me, I surely will give you one! The only ass you’ll be beating is your own daughter’s as we all have seen!”

Cole might be referring to a leaked video that shows Barbara and her daughter getting into a physical altercation.

“Please do, bitch. Your daughter be [eggplant emoji] all them rappers,” Barbara simply responded.

They continued to exchange harsh words about profiting off of their children and their own personal brands and business models. It’s unknown if either party chose to catch the other outside, though.