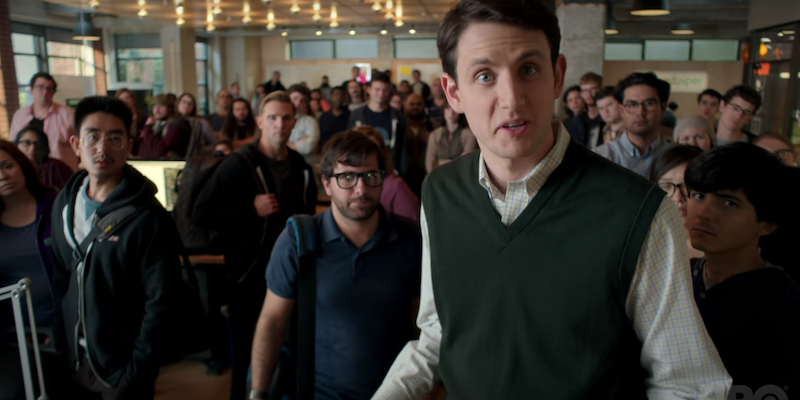 It's still the most important show about the internet.

Silicon Valley has always been adept at satirizing the tech world and all its eccentricities. But the story engine that propelled the series forward slowed down in season 4. The formula of putting a new obstacle in Pied Piper’s way only to have the gang come up with a solution at the last minute, then repeating this structure all over again the next week, became predictable.

Season 5 manages to fix this issue by returning to longer arcs over the season and upping the stakes so the formula isn’t as transparent. From episode one, which finally finds Pied Piper moving out of Erlich Bachman’s incubator and into actual offices, it’s apparent that the show will never be the same, for several reasons. Richard (Thomas Middleditch) is no longer focused on his compression algorithm, and he’s climbing an even bigger mountain—the “new internet” that Gavin Belson (Matt Ross) gifted him a patent for.

Last summer, T.J. Miller, who played the shiftless and egomaniacal Erlich for four seasons, left Silicon Valley in a highly publicized and messy exit, the details of which are still continuing to emerge. (In December he was accused of sexual assault by a former college classmate.)

Erlich was the kind of character who easily becomes a fan favorite, with Miller’s over-the-top performance as Pied Piper’s stoned, self-important blowhard of a board member generating plenty of memorable moments. Yet Silicon Valley’s Miller problem is also emblematic of other issues the show has had stemming back to its beginning. In better moments, Erlich, much like Miller himself, was funny in his absurdity, but as a character, he was obnoxious and unnecessary. The producers offered Miller a three-episode arc this season to close Erlich’s story out, and he turned them down. That’s OK: Silicon Valley doesn’t need him.

When building a business, there’s always going to be a new challenge. No matter how successful you are in Silicon Valley, you’re destined to keep taking two steps forward and one step back, whether you’re Mark Zuckerberg or Richard Hendricks. By season 5, Richard has already failed at one business. The show could’ve ended after Pied Piper’s compression algorithm was defeated by Hooli’s Box, but Silicon Valley is also a town of second acts. In its fifth season, with Pied Paper now fully funded, employing a large staff, and facing the expectations of the whole industry, Mike Judge’s acclaimed comedy forces Richard to work harder than ever before to pull off the pivot he so emphatically promised.

One of the pleasant surprises of Miller’s departure is that it gives Middleditch a greater chance to shine in the lead role. Middleditch has always done great work on Silicon Valley, not playing Richard as a Big Bang Theory-esque caricature of a nerd, instead making him neurotic to a fault yet also sympathetic and relatable. (In one funny storyline this season, Richard is forced to take a hard look in the mirror after Jared tries to get him to make friends with another CEO who seems completely lacking in personality.)

Richard is always on the verge of a nervous breakdown, but the fun of season 5 is seeing what he looks like in boss mode. As you might’ve guessed, he’s nervous, wishy-washy, and uninspiring. What makes Richard likable though, and what makes Middleditch’s performance so impressive, is his unwavering sense of idealism and determination. Everyone in Silicon Valley claims they want to change the world for the better, but Richard is the kind of person who means it—and could be capable of it.

The rest of the supporting cast continues to be tip-top. Kumail Nanjiani, who may be Silicon Valley’s next breakout star following the success of The Big Sick, is lovably pathetic as the hapless Dinesh. His scenes with Martin Starr’s pessimistic, devil-worshipping Gilfoyle play like a Laurel and Hardy routine for the digital era. The best character on the show is Zach Woods’ Jared. Woods, who was also underrated in the later seasons of The Office as Gabe, makes Jared the kind of character who keeps getting better with each disturbing layer that gets pulled back. He seems like a good-natured dork, but every dark detail that emerges about Jared adds another hilarious piece to the puzzle.

The show’s female characters are still underutilized, despite the fact that Suzanne Cryer is hysterical as Laurie Bream every time she’s on-screen, and Amanda Crew does as much as she can with the level-headed Monica. She’s a grounding force among Silicon Valley’s lead cast of man-boys. Several women have also gotten great guest spots on the show over the years, but much like the real Silicon Valley, the show’s cardinal sin has always been its failure to make women a real part of the narrative.

Silicon Valley remains the most important show about the internet. Judge and co-showrunner Alec Berg always give the impression that they’ve done their homework, crafting a journey for their underdog heroes that’s as unpredictable as it is believable. The show more than ever is a vital and insightful satire of America’s humorless oligarchs.