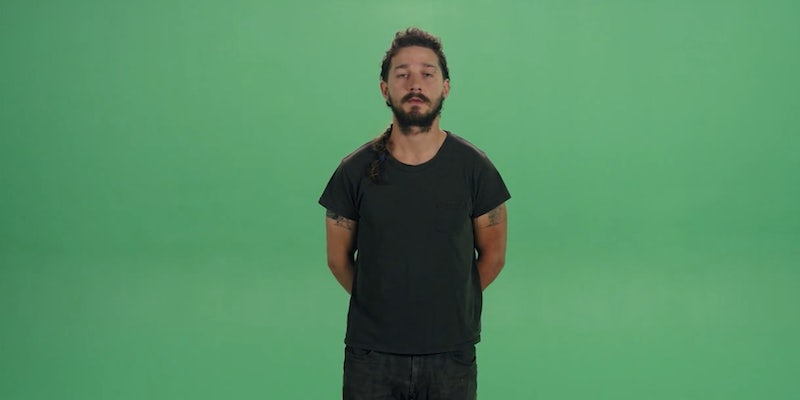 Shia LaBeouf‘s latest art project allows you to superimpose him onto any background, with LaBeouf performing a series of monologues in front of a green screen. Has it resulted in a ton of dumb video memes? Duh. Yes, of course it has.

The film project was developed with artists Nastja Säde Rönkkö and Luke Turner, his collaborators on the performance art piece #IAMSORRY last year. This involved LaBeouf sitting in a gallery wearing a paper bag on his head with “I AM NOT FAMOUS ANYMORE” emblazoned across the front, while spectators visited individually to interact with him. Our own reporter found it to be a surprisingly disturbing experience.

Rönkkö, Turner, and LaBeouf’s new work was conceived for the BA degree show at Central Saint Martins art and design school in London. The graduating students were asked to submit short segments for LaBeouf to perform, creating a 31-minute series of clips that screened during the degree show. They range from LaBeouf calmly reciting song lyrics to standing on his head or humming with his back to the camera.

Speaking to the Guardian, Central Saint Martins student Andrew Smith said, “A lot of us became interested in the way that Shia was being used as an artist and engaging with his art practice, but also using his status as a celebrity as a platform for his work. Shia LaBeouf is in this place that oscillates between the two worlds of his mass audience and his art audience. And this was also about branching those two audiences, making the live stream an access point for people who might not know or have visited a degree show.”

LaBeouf’s performance art often plays with the idea of public humiliation and celebrity, acknowledging the fact that he is best known for tabloid scandals and the critically derided Transformers movies. #IAMSORRY referenced LaBeouf’s frequent need for public apologies, which at the time were focused on the accusation that one of his short films was plagiarized from a graphic novel by Daniel Clowes.

It’s easy to ridicule LaBeouf’s art work, which is kind of the point because it all relies on his own notoriety. We wouldn’t be writing about this degree show video if it was just some random guy reciting stuff into a camera, but the presence of LaBeouf makes it interesting.

The addition of a green screen background and a Creative Commons license encourages people to remix the video, which LaBeouf surely knew was an invitation to further mockery online. His motivational speech segment has already turned into a meme, including remixes like the clickbait-friendly “Shia LaBeouf delivers the most intense Haka of all time.”

And an enraged Nike ad.

Some of these videos have more than 100,000 views in less than a day. Like it or not, this is proof of people engaging with performance art on a massive scale.