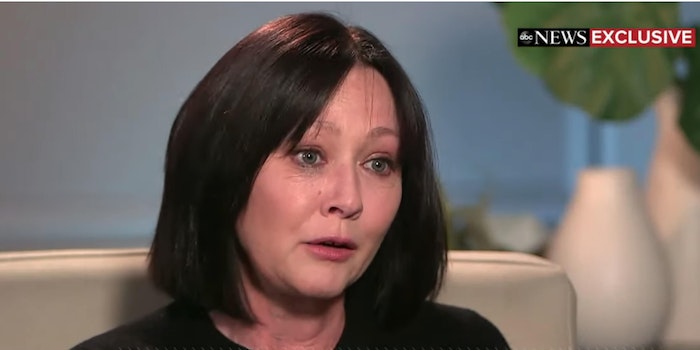 The 90210 and Charmed star appeared on Good Morning America to share that she now has stage 4 cancer, and that she mostly kept the diagnosis to herself for the last year, even through the death of Luke Perry. But Doherty did share the news with 90210 co-star Brian Austin Green, who gave her support during long days on set. She says she kept the news to herself to prove she could still work.

“Our life doesn’t end the minute we get that diagnosis,” Doherty said. “We still have some living to do.”

Doherty was first diagnosed with breast cancer in 2015, and was open with fans about what she was going through, sharing photos of radiation and chemotherapy. She went into remission in 2017.

Doherty says she came out with the news to get ahead of court documents that will disclose her diagnosis. After her home was damaged in the Woolsey Fire in 2018, Doherty sued State Farm, alleging that she was made to pay for out-of-pocket expenses that should have been covered. Doherty says dealing with State Farm is “one of the most horrific processes I have ever been through,” but she is looking forward, too: “I think the thing I want to do the most right now is I want to make an impact.”