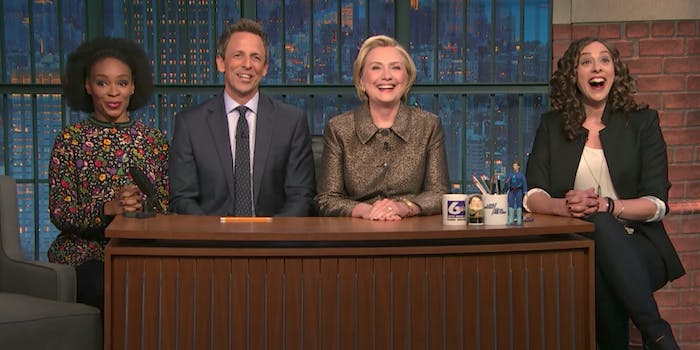 Seth Meyers has a recurring segment on Late Night called “Jokes Seth Can’t Tell,” where his writers deliver jokes that Meyers can’t pull off. In its latest iteration, he had a special guest finish some very specific jokes.

The segment started out normally as Meyers’ writers Amber Ruffin and Jenny Hagel finished his jokes until he noticed that his next one wasn’t applicable to either of them. So they brought on Hillary Clinton, who poked fun at herself as well as the perception that everything—no matter how small—is her fault. At least according to Fox News.

And you know what? Her delivery isn’t bad!

Clinton joined Meyers later in the show to talk about her reaction to Democrats’ historic 2017 election wins, assertions by Donna Brazile—the DNC’s former interim chair—that the Democratic primary was rigged to favor Clinton (which has since been disproven), and how Donald Trump is undermining his own Secretary of State.

“I think the fever is finally breaking,” Clinton told Meyers. “I think that Americans, as we saw last night, are saying, ‘You know what? We really like our health care, we don’t like hatred and bigotry, and we don’t want to get shot wherever we go in our country.’ So I think there is a growing awareness that the only way to reverse this is actually to go out and vote and vote for people who have your values and will stand up and fight for them.”