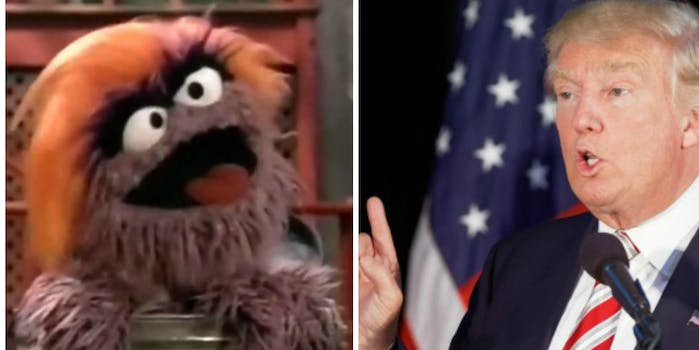 When President Trump proposed his 2018 budget, it was revealed that federal funding for the Corporation for Public Broadcasting, of which PBS is a part, would be eliminated if the president had his way.

Now we have to wonder what will happen to Sesame Street and all its beloved characters. Puppets like Cookie Monster, like Grover, like Oscar the Grouch. What will they do if Sesame Street is boarded up and closed down? (They’ll probably be fine, because they’ve recently moved to HBO, but let’s think of them as a metaphor for their PBS.)

For gosh sakes, what does Elmo’s future hold? Unfortunately, a new viral video might show us exactly what happens to that friendly furry monster.

Due to cuts in funding to PBS, our favorite furry monster is out of work. Featuring #ParodyElmo performed by Jeremy Olenski! Written by Adam Bozarth and Alex Firer.

It’s a rough world out there, even for the Sesame Street gang who, through no fault of its own, has stayed in its comfortable bubble for the past 48 years. Now, Ernie might be forced to get a job, Bert might have to start driving for Uber, and the Count might have to actually go back to CPA school.

As for Big Bird, Jimmy Kimmel already filled us in on the bad news.

One theory that’s recently emerged about why Trump wants to get rid of PBS is because Sesame Street hasn’t exactly been kind to him throughout its history.

He was represented by a puppet named Donald Grump who walked around in an orange wig in 2005. As the Washington Post points out, “There are only three known episodes in which the character ‘Grump’ appears, each time playing the villain in a moral allegory. Whenever Grump visits Sesame Street, chaos is not far behind.”

There also was a character in the late 1980s who called himself Ronald Grump and proclaimed himself a builder, and he bribed Oscar to build a Grump Tower out of trash cans.

Notice how Oscar refers to Ronald Grump at the 30-second mark as the “grouch who built a swamp in a day when nobody else could do it.” Apparently, there was no further conversation about whether Grump could eventually drain that swamp.

But if Trump has a vendetta against Sesame Street and is trying to punish PBS for it, he’s sort of looking in the wrong place. But no PBS still means no more Sesame Street for little kids who don’t have premium cable. Unless, of course, you happen to catch an Uber ride from Bert.