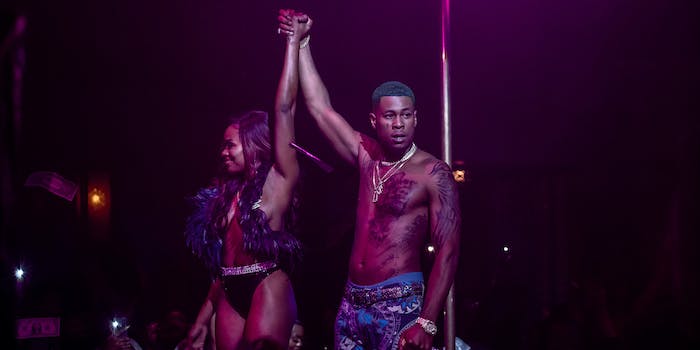 What’s new on Starz for December 2021

Need to know what’s new on Starz this month? You probably know the premium network for its smash-hit series like American Gods and Outlander. But this Droughtlander has been a long one (don’t worry, it’s back March 2022). But in the meantime, fans may find themselves browsing the app for new content.

Don’t worry, we’ve got you. Starz has plenty of movies to stream and several new, exciting series to obsess over. No matter what you’re into, there’s something new on Starz for you this December.

This series is a sequel to the hit series Power. It follows James’ son Tariq as he tries to reconcile his life as a college student with the family business hustling product.

Torn between his future and a need to understand and cope with the past, Tariq’s story is just the most recent in the Power universe’s growth.

The discovery of a woman’s body on the beach caused Jackie Quiñones’ whole world to turn upside down. Now, she’s got her police badge and a mission: take down the drug lord Frankie Cuevas Sr. But Frankie is out of prison, and his grip on the town will only get tighter.

Since losing his badge, the former-detective Abruzzo is no longer obligated to obey the law. Does this mean his hunt for the drug kingpin will only get darker? Hightown weaves a dark tale of addiction and self-sabotage in the Cape Cod area. This Jerry Bruckheimer crime drama is absolutely binge-worthy. And it’s new on Starz this December.

This famous Swedish film took 2011 by storm when it was released in English. The David Fincher film won critical acclaim for its tone. It also features incredible performances by Daniel Craig and Rooney Mara.

Disgraced journalist Mikael Blomkvist is hired by Henrik Vanger to find out who murdered his 16-year-old grandniece 40 years prior. To assist him, he recruits Lisbeth Salander, a highly intelligent hacker, and online investigator. Highly suspenseful and sometimes quite jarring, this mystery is a must-see new to Starz this December.

This neo-Western follows El Mariachi (Antonio Banderas) as he seeks to avenge the death of his lover. Desperado is the second in a trilogy, but it can be watched effectively as a stand-alone film. We do recommend giving El Mariachi a watch, though.

This is a grade-A stylized shoot-em-up with some unforgettable action scenes. For fans of Robert Rodriguez’s work, its prequel is considered his breakout full-length film. It’s a must-see bit of pop culture that’s new on Starz this December.

This biographical comedy-drama about Manchester’s music scene from the mid-70s to the 90s is a must-see for any music fan. The story revolves around Factory Records, which put out albums by notorious artists like Joy Division and New Order. It’s told from the perspective of Tony Wilson, the head of Factory.

The film frequently breaks the fourth wall to include jokes and input from actual artists. The film also intercuts scenes with footage of real performances in order to illustrate the mood of the time.

Everything is a documentary film that examines sexism in Hollywood. Featuring interviews from iconic actresses and female filmmakers, the film was made in association with the Geena David Institute on Gender in Media.

The contents of Everything have been a part of changing conversations in Hollywood; it’s essential viewing for any film historian. The film focuses on the experiences of women in film, but it also speaks to men in the audience.

Shows with Holiday Specials on Starz