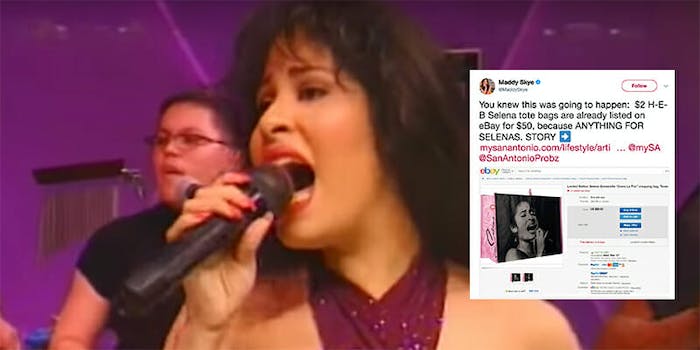 Texans are breaking the internet over $2 Selena tote bags

In Texas, there’s only one celebrity who can #BreaktheInternet.

Selena fans across the state on Friday stormed H-E-B, a Texas grocery store chain, and crashed the store’s website as they tried to buy limited-edition reusable bags honoring the late queen of Tejano music.

Customers tweeted about the Selena madness with #SelenayYHEB, posting photos of long lines at H-E-B stores all over Texas where people reportedly lined up early for the $2 tote bags. In San Antonio, the bags sold out in 15 minutes, according to San Antonio Express-News.

This is the line to get the #SelenaBag at @HEB on Port Ave. in Corpus Christi! They only had 1400 at this location. #AnythingForSelenas #SelenaYHEB pic.twitter.com/OHuYwNXaiz

@JackAcostaKENS5 I might be just a little late today. I’m standing in line 😂 #SelenayHEB (but I am taking video) pic.twitter.com/OgG4t5qTTD

The totes are so coveted that early buyers were selling them on eBay for as much as $50 on Thursday, the Express-News reported.

You knew this was going to happen: $2 H-E-B Selena tote bags are already listed on eBay for $50, because ANYTHING FOR SELENAS. STORY ➡️ https://t.co/4p5FWa9P5L @mySA @SanAntonioProbz pic.twitter.com/fIVg9qeFBc

Screenshots of H-E-B’s website showed it had crashed ahead of the bag sale, which was supposed to start at 12pm CT Friday.

“We are currently working to resolve the issues on HEB.com. The traffic to our website clearly speaks to the passion we all have for Selena, both throughout Texas and across the country,” a store spokesperson told GuideLive.

Plenty of customers were still lucky enough to score a tote, each featuring Selena’s photo and pink ‘Queen of Cumbia’ text. H-E-B collaborated with Selena’s sister, Suzette Quintanilla, and will donate $25,000 of the proceeds to the Selena Foundation, a nonprofit that supports communities and education. As of Friday afternoon, the bags are sold out across the state.

Amid the bag frenzy, memes cropped up in Selena’s memory. The Texas singer, who was killed by the president of her fan club in 1995, is remembered as a Latina icon who brought Tejana music to the mainstream.

When will y'all learn we will buy literally ANYTHING with Selena on it? #SelenayHEB