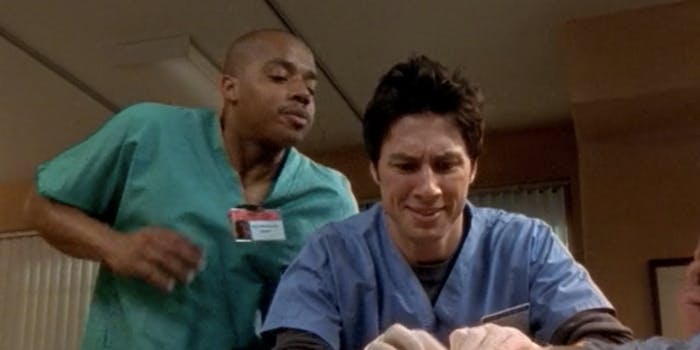 As the coronavirus pandemic forces millions of people to stay inside for the coming weeks, many have found refuge in rewatching their favorite TV shows. The 2000s medical dramedy Scrubs is a worthy candidate—and the stars of the show are even rewatching it as part of a new podcast.

Zach Braff and Donald Faison—who played J.D. Dorian and Christopher Turk, respectively—have launched the Fake Doctors, Real Friends with Zach + Donald podcast, in which they rewatch the beloved sitcom in its entirety, one episode at a time. The first episode aired on iHeartRadio yesterday and is now streaming everywhere.

The co-hosts will invite other members of the Scrubs cast and crew onto future podcast episodes, including show creator Bill Lawrence. In the first episode, Braff dishes about his pre-show life, which included working at a French Vietnamese restaurant in Beverly Hills. The actor apparently auditioned for J.D. twice without casting agents recognizing him.

Braff first tested the waters for Fake Doctors, Real Friends in February, asking on Twitter, “Should we do a Scrubs rewatch podcast?” Although Braff didn’t make an actual Twitter poll, it’s safe to say the response would have been overwhelmingly positive. His tweet has received nearly 128,000 likes, 7,300 retweets, and 5,200 comments. Among the ecstatic responders was journalist and author Shea Serrano, who recently released the PDF book Where Do You Think We Are? Ten Illustrated Essays About Scrubs.

To honor the social distancing mandate, Braff and Faison have begun recording Fake Doctors, Real Friends via video conference call from their homes. Scrubs aired from 2001 to 2010 and comprised 182 episodes—and yes, they will be addressing the maligned ninth season—so hopefully, their podcast will outlast this quarantine.