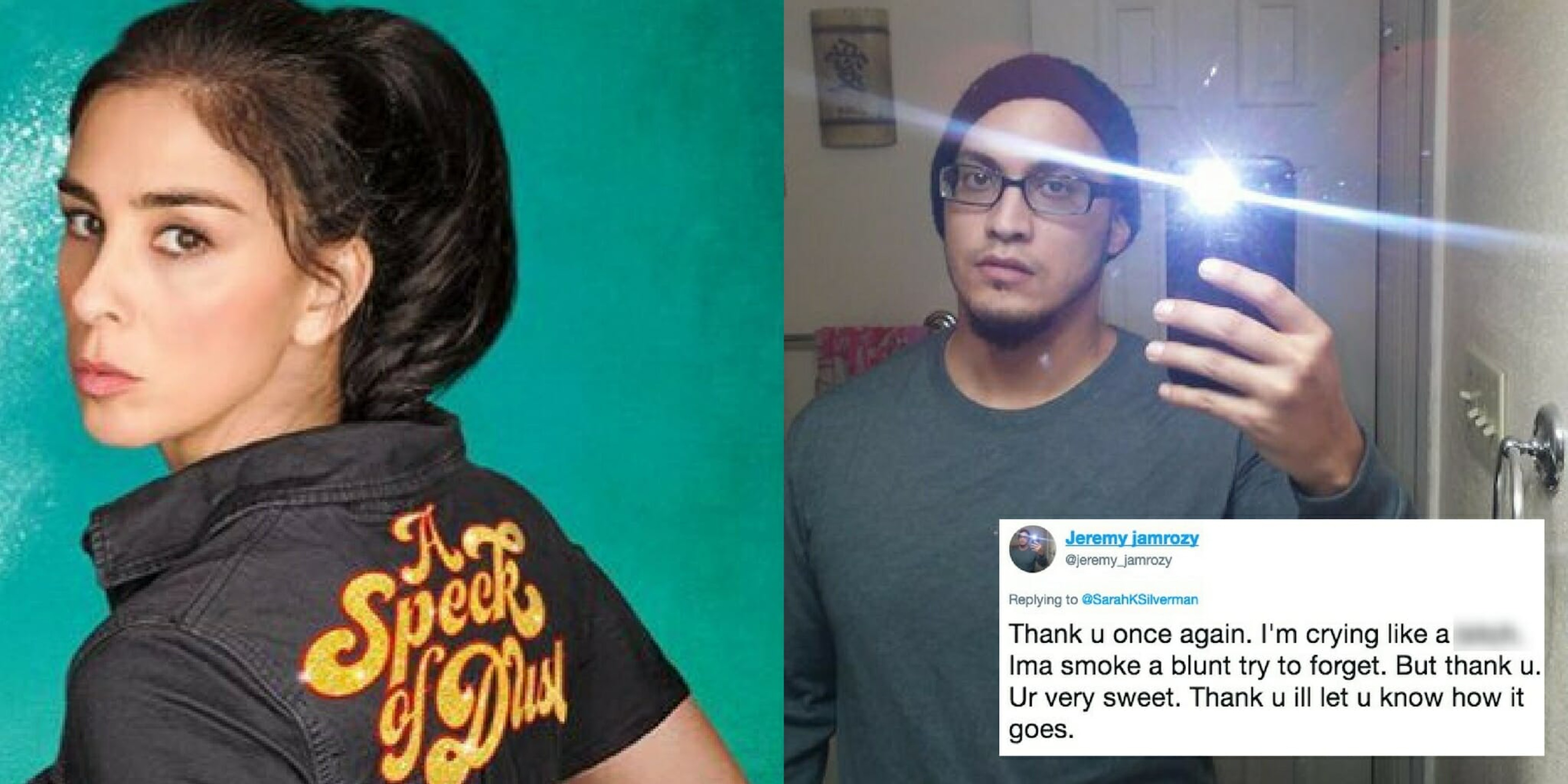 This is what happens when you treat 'people on the internet' as real people.

Comedian Sarah Silverman‘s Hulu Show I Love You, America is all about showing kindness and understanding toward people who wouldn’t typically be interested in hearing what she has to say. And even off camera, Silverman has continued to exhibit this kindness with people who show her the most disrespect—including one of her Twitter trolls, who’s now receiving her help to pay for his medical expenses.

On Dec. 28, Silverman engaged in a Twitter exchange with a man named Jeremy Jamrozy from San Antonio after Jamrozy called her a “cunt” in response to Silverman saying she’s open to people of different perspectives, as she promotes on her show.

An hour after Jamrozy’s crude tweet, Silverman responded that she had taken a stroll through his Twitter feed and understood the pain he was going through.

“I believe in you. I read your timeline and I see what you’re doing, and your rage is thinly veiled pain. But you know that. I know this feeling. P.S. my back fucking sucks too. See what happens when you choose love. I see it in you,” Silverman wrote.

Instead of tearing into Silverman’s concerned and thoughtful response, something that could have been seen as performative or insincere, Jamrozy opened up to Silverman about sexual abuse he faced as a child and how he’s not able to pay for help.

“I can’t find peace. If I could find that guy who ripped my body, who stripped my innocence, I’d kill him. He fucked me up and I’m poor so it’s hard to get help,” Jamrozy replied.

Silverman sent him a link for sexual abuse support groups in his area, and she encouraged him to go to one: “Maybe it will be lame or suck but try one for me, your friend the cunt who loves you.”

Jamrozy told Silverman that he found the gesture sweet, and that he only responded to her unkindly because he wanted to get his account banned—something expressed on his Twitter timeline as well. After telling her about how difficult it feels for him to open up, she sympathized by saying that so many other people in those groups have felt similarly, and he thanked her for her help.

Lol u really are so sweet u don't even have to acknowledge me and u find shit for me. Thank u. I just said that to get banned. I will try it but its hard to talk about usually talking bout it angers me and me angry. I get violent I get crazy. But I will try real hard.

Everyone there feels or felt the same way.

Thank u once again. I'm crying like a bitch. Ima smoke a blunt try to forget. But thank u. Ur very sweet. Thank u ill let u know how it goes.

Through other threads of their conversation, Silverman expressed her rage at the person who abused Jamrozy, and she encouraged him to not punish himself by holding onto his anger.

“I’m fine,” she wrote. “I see something in you. My gut tells me you could have a great life. My shrink says we don’t get what we want, we get what we think we deserve. I’m telling you, you deserve so much more than you know.”

Haha honestly I don’t know. All you wrote was “cunt” but I saw it and clicked on u and saw you were just trying to get kicked off Twitter. I saw the rage and pain. And looked at your avatar and just… saw so much in you. In your eyes I guess. Dunno

Eyes are the window to the soul. I don't want to be like my drug addict thug ghetto family. I will try hard. I also must apply for disability and it really sux I like to work. Ill get positive soon I've always been negative. Hence no friends. I'm an asshole

Jamrozy also was experiencing physical pain with several slipped discs in his back and no health insurance. The following day, Silverman tweeted a callout to get him medical treatment in San Antonio, and she got a local company to respond.

However, after going for a consultation, Jamrozy learned that his back treatment would be more costly than expected—he has five herniated discs, they found. Jamrozy set up a GoFundMe page, which Silverman also promoted, and while he had initially set a goal of $150, people have raised more than $1,000 for his medical and living expenses while he’s unable to work.

Yo SAN ANTONIO! Any kickass back/neck care specialists willing 2 help my friend @jeremy_jamrozy He has several slipped discs, no insurance, & can’t work bc of severe pain. Let’s get him back on his feet!! Who’s in?

Jeremy went for a consult and it’s worse than we hoped. If you’re so inclined, help get him on his feet and working again.
He’s in San Antonio if you’re an actual expert that can help with ur skills.. https://t.co/M61SdGWZh9

Anyone in the San Antonio area that can help Jeremy? He’s in immense back pain and unable to work https://t.co/v1IrcWf3ir

According to mySA.com, Silverman has now offered to pay for Jamrozy’s medical treatment, and he’ll be donating the $1,000 he’s raised to other San Antonians who need assistance.

“I was once a giving and nice person, but too many things destroyed that and I became bitter and hateful,” Jamrozy told mySA.com. “Then Sarah showed me the way. Don’t get me wrong, I still got a long way to go, but it’s a start.”

On Twitter on Friday, Jamrozy thanked the people following along with his story for their emotional and financial support, and he announced he was going to take a break from the attention.

Thank you to all the support financially, emotionally, and donations. This is more than I could have wished for. Thank you nicos organics I received ur package am excited to try the products out. Thank u everyone. U showed me a lot within a few days. Love u all