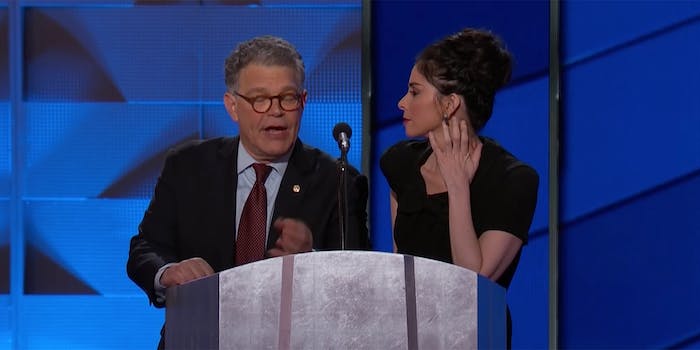 The hacker linked to an anti-Clinton video from Anonymous.

Silverman supported Sen. Bernie Sanders (I-Vt.) throughout the Democratic primary race but is now calling for Sanders supporters to support Democratic presidential nominee Hillary Clinton. She joined Sen. Al Franken (D-Minn.) early into the first day of the DNC and tried to speak over Sanders supporters who were dissatisfied with Clinton’s pending nomination.

Most Sanders supporters will back Clinton, according to a recent poll, but a vocal number of supporters won’t support her no matter what, operating under the “Bernie or Bust” moniker. In an off-script moment while Silverman and Franken were asked to stretch for time following the comedian’s speech, she called out the people on the floor trying to shout over them.

“Can I just, to the Bernie or Bust people, you’re being ridiculous,” she said.

On Wednesday morning, a tweet posted to Silverman’s Twitter account included a link to an anti-Clinton video posted by the “Anonymous Official” YouTube channel and the question “America, are you awakening?” in English and Russian with hashtags #Hilary4Prison and #Anonymous.

Of course, many people didn’t buy that Silverman had actually written that herself.

Silverman responded minutes later and said that her account was hacked. The original tweet has since been deleted.

MY TWITTER ACCT GOT HACKED THIS IS NOT ME https://t.co/hmZYLdrjxi

Silverman is far from the first celebrity to have been hacked on Twitter in recent months, although many of those previous hacks were due to repeatedly used passwords showing up in data dumps.