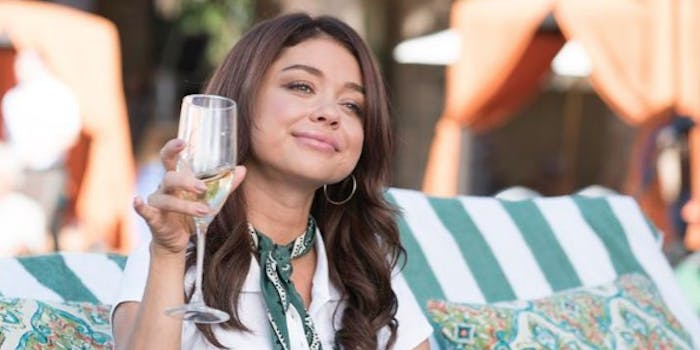 'I don't know what the writers would say?'

After nine seasons of dating dudes, it looks like Modern Family‘s Haley Dunphy is ready to mix things up a bit. Or at least Sarah Hyland, the actor who plays her, is.

Fans have apparently been quietly rooting for the oldest Modern Family child to have a bisexual plotline, and Wednesday afternoon one went ahead and asked Hyland flat-out to confirm or deny the theory on Twitter:

“I don’t know what the writers would say?” she admitted. “But I confirm.”

I don't know what the writers would say? But I confirm. https://t.co/KfRXMvCvl8

Haley’s dating life has been a recurring storyline on the sitcom, but according to Glamour her bisexuality isn’t something that’s been explicitly stated, or even hinted at. According to People, all of the character’s nine love interests have been men, “beginning with her on-again off-again boyfriend Dylan” all the way up to “former manny Andy (Adam DeVine), with whom she was in a ‘will they or won’t they’ arch until they finally started dating in season 7.” So Haley has yet to date a woman, but with 15 episodes in the coming season, who’s to say where her storyline will go?

Writers from the show have yet to acknowledge Hyland’s tweet, but could this be a sort of self-fulfilling prophecy? Hyland confirms the rumor, forcing them to give her an interesting arc this season? Or is she just sharing a spoiler for the stans? Either way: It’d be a big move for representation on a show that first made its name by bringing gay characters for a major network.