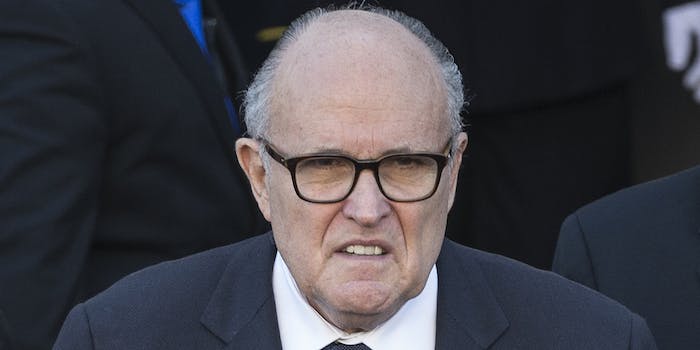 'I saved more black lives than any of those people you saw onstage.'

Beyoncé brought down the house at the VMAs Sunday night with an incredible 16-minute medley of songs from Lemonade, but not everyone was as blown away by the performance.

In an unsurprising turn of events, former New York City Mayor Rudy Giuliani, who previously accused Beyoncé of attacking the police with her platform, criticized her once again for her MTV performance during Monday’s Fox and Friends, calling it “a shame.”

During “Pray You Catch Me,” Beyoncé’s dancers, who are dressed like angels, dropped as the lights over them turned red—as though they were shot down. It can be seen starting around 2:07.

Addressing police violence and bringing awareness to the unrest in her music and performance is nothing new for Beyoncé; she also brought the mothers of Michael Brown, Trayvon Martin, Eric Garner, and Oscar Grant as her guests to the VMAs.

Fox and Friends discussed the performance with Giuliani, who focused on how much more work he did for the black community as mayor than artists have with their performances.

“You’re asking the wrong person because I had five uncles who were police officers, two cousins who were, one who died in the line of duty,” Giuliani said. “I ran the largest and best police department in the world, the New York City Police Department. And I saved more black lives than any of those people you saw onstage by reducing crime and particularly homicide by 75 percent.”