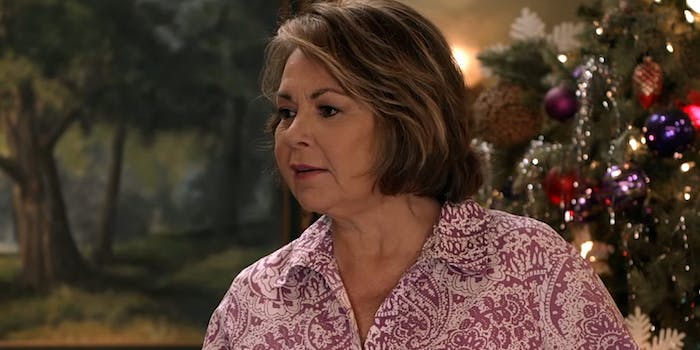 A new season of Roseanne is set to debut March 27, 20 years after going off the air. And according to series creator Roseanne Barr, they’re keeping up with the times: Her character will be a Trump supporter.

Speaking at a Television Critics Association event on Monday, Barr said she felt a responsibility to reflect the real America: “Half the people voted for Trump and half didn’t. It’s just realistic. I’ve always attempted to portray a realistic portrait of the American working-class people and, in fact, it was working-class people who elected Trump, so I felt that was very real and something that needed to be discussed, especially about polarization within the family and people actually hating other people for the way they voted, which I feel is not American.”

(The working-class-people-elected-Trump argument has been widely circulated but it is not, in fact, fact. Also, half the country did not vote for Trump. About 62 million Americans did, which is about 20 percent of the country.)

Barr, who is a Trump supporter and has expressed pro-Trump sentiment on Twitter, claims she doesn’t always agree with what the president says or does, but bristled at a reporter’s question about him being xenophobic. Asked about the possibility of Oprah Winfrey running in 2020, she had another candidate in mind: “I think I would be a better president than Oprah and Susan Sarandon, possibly even President Trump.” She claimed she couldn’t vote for Hillary Clinton “because of Haiti.”

Barr tweeted last summer that the new show is “not about Trump,” but that tweet is now deleted. On Monday she added that she’s not currently tweeting because her kids “took my Twitter password away from me.”