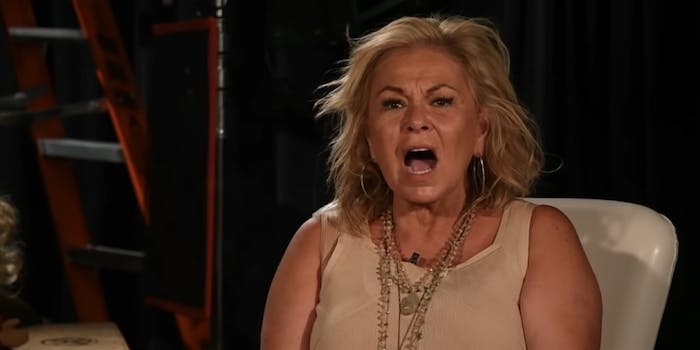 Last week, Roseanne Barr mentioned on Twitter that she would “like to speak directly to you, the people, and cut out any middlemen who use for clickbait/ad revenue while seeking to divide rather than unite,” and that she would be answering questions from “the people” on YouTube this week.

Two months ago, Barr’s show Roseanne was canceled after she posted a racist tweet about former Obama aide Valerie Jarrett. In the wake of that controversy, Barr attempted her form of damage control, at one point claiming Ambien might have been to blame, and then claiming the tweet was actually about anti-Semitism.

So perhaps YouTube is a medium where she can better explain herself. In a video uploaded on Thursday titled “Roseanne explains the Valerie Jarrett tweet,” someone behind the camera instructs Barr to act like she’s giving a presidential address. Instead, Barr abruptly yells, “I thought the bitch was white,” referring to Jarrett. She also wants to talk about how Jarrett “wrote the Iran deal.”

This is quite a pivot from a July 16 video where Barr instructs women on how to pee standing up.