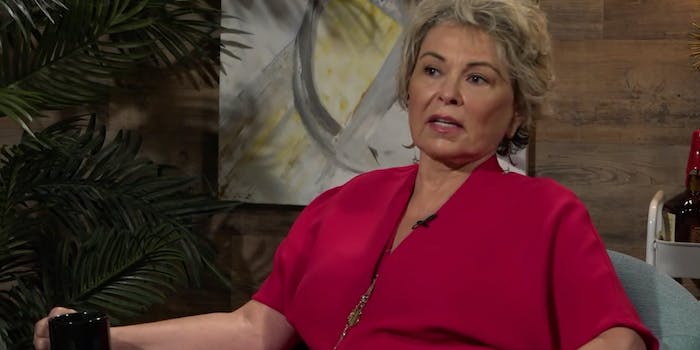 Even the drug's makers confirmed that racism isn't a side effect.

ABC’s Roseanne reboot is no more. After creator Roseanne Barr tweeted a racist comment comparing Obama aide Valerie Jarrett to the Muslim Brotherhood and Planet of the Apes, ABC dropped her show and called her tweet “abhorrent, repugnant and inconsistent with our values.”

But don’t worry, Barr has an explanation for her insensitive comment. She says she was using Ambien when she made the comparison.

“[G]uys I did something unforgiveable so do not defend me,” she wrote in a deleted tweet. “[I]t was 2 in the morning and I was ambien tweeting—it was memorial day too—i went 2 far & do not want it defended—it was egregious Indefensible. I made a mistake I wish I hadn’t but…don’t defend it please.”

Barr went on to argue that she has “done weird stuff” while using the drug, like “cracked eggs on the wall” at 2am. But racism isn’t one of the medication’s side effects, and Ambien’s creator Sanofi wants consumers to know that as a fact.

“People of all races, religions and nationalities work at Sanofi every day to improve the lives of people around the world,” Sanofi tweeted on its U.S. account. “While all pharmaceutical treatments have side effects, racism is not a known side effect of any Sanofi medication.”

People of all races, religions and nationalities work at Sanofi every day to improve the lives of people around the world. While all pharmaceutical treatments have side effects, racism is not a known side effect of any Sanofi medication.

Ambien is one of the most popular sleep medications in the U.S., designed for people who experience insomnia. It also has a long list of possible side effects, including memory loss, an inability to concentrate, emotional blunting, depression, anxiety, nightmares, sedation, confusion, and diarrhea, according to American Addiction Centers. Racism, however, does not make the list.

Barr’s excuse is a pretty disturbing if not a convenient one: Give a white person some drugs, and they’re allowed to be bigots—but don’t worry, they’ll be back to their real, polite, and racist-free selves after their medication’s side effects have worn out.

However, all you have to do is look at Barr’s Twitter history to find that whatever beliefs she had before taking Ambien simply came out in full force after she took her prescription.

Barr isn’t one to shy away from claiming her opponents are the real racists, either. Earlier this month, she fought with an intersectional feminist, claiming “intersectionality is racism,” even though intersectional feminism consistently strives to put women of color at the forefront. And while Barr admits that Black and Latinx people are targeted regularly by police, when commenting on #BlackLivesMatter, she told the Rubin Report that the news is “wagging the dog” and “speaking to the demographic it wants to fleece,” calling the news “bullshit.” Black lives matter, Barr seems to suggest, while also implying that Black Americans aren’t terrorized as much as people want to believe.

in the 90's we thought that globalism would destroy the US working class, particularly the African American working class. We were/are right.

u do not get to call a jew or a black man white nationalists, u braindead freak

Barr claims that she’s spent her life fighting racism and that her comments about Jarrett were rooted in her belief that Jarrett was “Jewish and Persian,” not Black. But comparing any person of color to an animal is, by definition, racist. It falls into a much larger legacy of dehumanizing Americans of color, with Black people in particular regularly compared to apes by racists. It doesn’t take long to see history repeating itself, either: President Donald Trump was criticized throughout the U.S. for comparing deported immigrants to animals.

There’s also Barr’s Islamaphobia. By comparing Jarrett to the “Muslim Brotherhood” as means to vilify her, Barr essentially implied that the former Obama staffer was a terrorist. Of course, she wasn’t just incorrect about Jarrett’s ethnicity—both of her parents were Black Americans living in Iran—but the joke falls in line with Barr’s more subtle xenophobia, including her clear disdain for immigrants. In Barr’s eyes, it’s white, working-class America first, everyone else second, and trying to equate a Persian woman with Muslim extremism is perfectly fine.

With Roseanne canceled and many of the show’s talent criticizing her, Barr can claim all she wants that Ambien made her racist. But it didn’t. Roseanne Barr made Roseanne Barr say something racist. And for once, she couldn’t blow off the consequences.