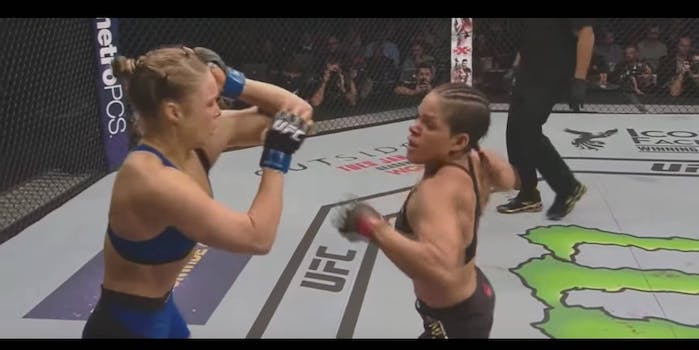 Ronda Rousey has lost her second fight in a row since being defeated by Holly Holm last November, and the internet is here for it.

Last night, UFC bantamweight champion Amanda Nunes delivered a stunning knockout to Rousey, ending the fight within 48 seconds of the first round. After Nunes landed more than 20 strikes onto Rousey, the referee stepped in and declared the fight a technical knockout, allowing Nunes to retain her championship title.

The fight garnered a stadium crowd of more than 19,000 people, and more than 1 million pay-per-view sales are expected, according to Yahoo Sports.

After the fight, UFC fans declared on Twitter that Rousey might as well call it quits. Sure, it wasn’t a “Ronda Rousey is over party,” but it might as well have been.

To be fair Ronda Rousey won the electoral college vote

Every time Ronda Rousey gets hit she looks like she's never been punched in the face before and doesn't know why it's happening. #UFC207

Rousey just keep acting. You were great in Save the Last Dance

SHE'S BACK (at the dentist's office) pic.twitter.com/nx5vIlkSi3

Me: "Uber surge can't be that bad tonight"

BREAKING: ronda rousey has already celebrated new year after getting punched into next week

Anyone saying Ronda Rousey is a shitty fighter should have to fight her.

Commentators speculate that this loss, compounded with her loss to Holm and her 13-month-long absence, may push Rousey toward retirement.

Regardless of the future of Rousey’s career, she paved the way for female fighters to be employed by UFC after becoming the first woman ever to do so, and fans recognized that as well.

Ronda Rousey made women's MMA what it is. Shame she went out that way but this sport doesn't care who you are. Hope she is alright #UFC207

Rest up, Rousey. Hopefully, your 2017 is far less painful than projected.