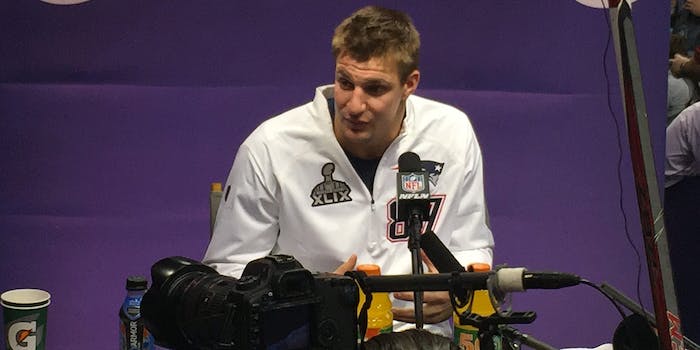 His mainstream moment is a long time coming, but before you dedicate Super Bowl Sunday to gawking at his feats of strength, the Daily Dot advises catching up with his body of work. It’s one that includes jaw-dropping talent mixed with savant comedic chops.

Where did this leviathan of a human being come from?

Buffalo, N.Y., basically. Since joining the NFL back in 2010, Gronk has been a fan favorite but also something of an Achilles-esque tragedy. Touted as the best tight end in college football at the University of Arizona before the ’09 season, Gronk watched his stock go south after a back surgery ended his junior season. That’s why he’s a Patriot—taken No. 42 overall in the draft, the perennial world-beaters had the luxury to wage a second-round draft pick on Gronk’s upside as a 6’6”, 250-pound specimen.

It paid immediate dividends with a monstrous rookie season. The good times kept rolling in 2011, wherein Gronk played a major mismatch-laden role in getting the Patriots to the Super Bowl.

But his first moment in the sun was not to be: Prior to that Super Bowl, in the AFC Championship against Baltimore, Gronk suffered a nasty high ankle sprain. He played in the Super Bowl, but he was a statistical non-factor in the game—the strained ligaments would later require surgery—and the Patriots lost to the New York Giants, 21-17.

In 2012, he broke his forearm and, upon returning toward the end of the season, re-injured it again. Without Gronk’s difference-making presence, Baltimore defeated New England and went on to win the Super Bowl. By 2013, Gronk underwent a third and fourth surgery on his forearm and another back surgery. He made his ’13 debut in October and played only six games before tearing his ACL and MCL in one dastardly tackle.

But this year he’s been healthy as a horse. Life is good, the age of the Gronk is upon us, and he’s ready to hit on TV hosts and reporters.

“What’s one thing that people don’t know about you?”

But hasn’t he always been a rascal?

That’s true, especially relative to his stoic team—one that prides itself on cold answers and NFL cliches in pressers. Here he is making fun of his quarterback, Brady, a notorious hard-ass.

But early in his pro career, Gronk was basically a Jersey Shore roommate on the wrong side of adorable. Here he is dancing shirtless in a Las Vegas club with a broken forearm.

But his most endearing early hit was in an interview with ESPN Deportes. Reporter John Sutcliffe asked him post-game: “You guys gotta celebrate though, right? Tequila, beer, a little bit of everything?”

His response was perfect: “Si… (searching for the words in Spanish) …Yo soy fiesta.”

That’s right. Thanks to his injury history, anyone that gambled on Gronkowski in the second and third round of fantasy drafts in August was handsomely rewarded with a monstrous season worthy of first-round production. We all remember what happened next: On the back of Gronk, the Trap Lordz infamously buried Daily Dot Managing Editor Austin Powell, Social Media Editor Evan Weiss, staff writer Patrick Howell O’Neill, and illustrator Jason Reed on the way to a historic title.

My dude @HowellONeill should have started Romo but at least it didn't matter in the @dailydot league semis. pic.twitter.com/a8X2AxXJNB

How did Gronk evolve into the lovable oaf who’s hijacking the Super Bowl?

My guess is that facing professional mortality and then thriving means more chances to be boisterous and happy. His handlers put him in a position to be less of a clueless bro, too. A photo shoot with kittens did wonders for his #brand.

Ladies, not sure who to root for tomorrow? Here's New England's Rob Gronkowski with a kitten. Seahawks eat kittens pic.twitter.com/6WcqScoWZN

My dream man even likes kittens. We are a perfect match ☺️ @RobGronkowski pic.twitter.com/aREF8OQKho

The fact that he’s a proudly Polish guy from Buffalo, N.Y., evokes Rust Belt values, a down-home edge, and a family-focused simplicity that you just don’t get with, say, men in Silicon Valley or men of institutional privilege who attended the University of Virginia. During the Pats holiday party in December, he was the tree.

In November, he enjoyed his most quintessentially Gronk moment: a bulldozing touchdown followed by a sideline dance for the ages.

Wow, I can’t wait to see what kind of stunts he pulls during the Super Bowl.

Two things are clear at this point. On Sunday, we’ll hear Gronk roar…

And win or lose, he’s driving back to Buffalo in the party bus that he bought from a church.