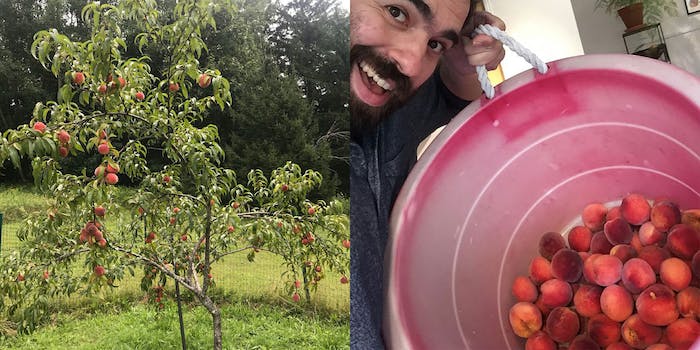 Guy defends his peach tree from bear by playing podcasts

It’s a core truth of the human experience: Eventually, you will be forced to defend your turf from pesky animals.

For most of us, it’s roaches and rodents, but for writer, producer, and developer Rob Dubbin, it’s the dang bear that raids his peach tree. Living with a big yard, Dubbin’s only recourse against a growing and hungry threat was to outthink the creature. He turned to Gimlet Media’s Reply All podcast.

Via Twitter on Tuesday, Dubbin said that he read about bears shying away from human voices. He set up a loop of podcast chatter and placed a speaker by his tree.

“Ultimately I settled on Reply All because I figured even the most starving bear would quail at the haunting sound of PJ Vogt‘s laughter. I loaded up an old iPhone with 100 episodes and hooked it up to a speaker and a heavy-duty telescope battery, underneath a waterproof hood,” he wrote.

OK I've been waiting a couple days to share this because I honestly wasn't sure how it was going to turn out, and I'm still not sure. The first thing you need to know is we have a peach tree. I named it Belvis. pic.twitter.com/12RAd1w8YM

The show was tickled enough to tweet about Dubbin’s act of human ingenuity, too. “I guess this significantly complicates the next episode we were working on, which was just two hours of us saying ‘come here, bears, there are some nice ripe peaches for you,'” host Alex Goldman wrote.

Indeed, many wild animals are afraid of humans. According to National Geographic, a study that blared political talk radio at cougars scared them into abandoning their prey. Cougars feed on their kills for days at a time, unfortunately, and this fear of humans can drive cougars to waste their limited energy on a frenzied state of rampant hunting.

Here’s hoping that bear found some berries or something.

If you’re looking for something to listen to, here are the best Spotify playlists, true-crime podcasts for your inner sleuth, the best podcasts on Spotify, and the best political podcasts to keep you informed.