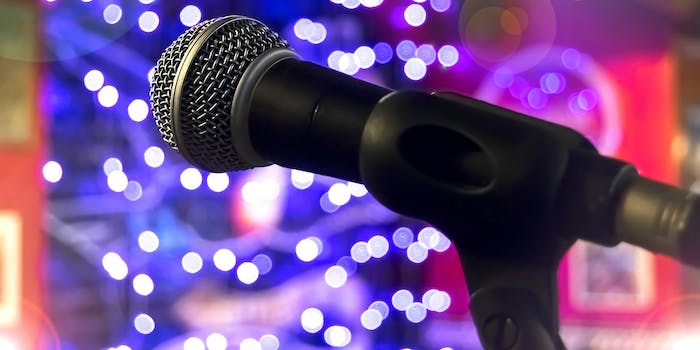 At the RNC, Muslim comedians laugh through the Trump era

A few block city blocks from where the Republican Party was gathering to officially nominate Donald Trump for president of the United States, Maysoon Zayid perched on a stool, brushed her long, wavy hair back over her shoulder, cracked a smile, and bragged about being Trump’s worst nightmare.

Zayid is a Palestinian American and has cerebral palsy. She’s disabled (like the New York Times reporter Trump publicly mocked), she’s a Muslim (whose parents Trump suggested shouldn’t have been let into the country in the first place), and she’s a woman (who, like Fox News reporter Megyn Kelly, has blood “coming out of her wherever”).

Zayid is a comedian—and a wickedly funny one at that. On the second night of the Republican National Convention in Cleveland, Zayid deftly found the humor in the dark situations American Muslims face on a daily basis. “When I go through airport security, the TSA doesn’t just see an Arab, they see a shaking Arab,” she cracked. “I’m on the next plane to Guantánamo Bay, which is great because I heard there are a lot of hot Arab men there.”

“I’ve been married for six years and my mother-in-law had never been to the U.S. to see her son,” the New Jersey native says of her husband, whom she met in Gaza. “She can’t get into the country because she’s on the terrorist watch list.”

She waits a beat.

“That’s because I put her on there.”

With fellow Muslim standup comic Dean Obeidallah, the host of a politically minded talk show on SiriusXM radio, Zayid came to Cleveland to find the laughter in Trump riding a wave of Islamophobia to the 2016 GOP presidential nomination.

The event, held in Cleveland’s historic Hanna Theatre, was organized by the Arab American Institute, a bipartisan group founded in the mid-1980s to encourage Arab Americans of all religious faiths to get more involved in the political process. The group typically holds public policy forums in conjunction with the quadrennial major party conventions. However, as the organization’s co-founder and president Dr. James Zogby said in his introductory remarks, it didn’t seem like the political climate surrounding the 2016 Republican convention was particularly conducive to that sort of measured discussion. Instead, the group threw an unconventional event for an unconventional election cycle.

“This has been a difficult year, a difficult decade,” Zogby sighed. “Sometimes all you can do is laugh.”

In an interview with the Daily Dot after her set, Zayid insisted she wanted to perform as close as possible to the Quicken Loans Arena, where the convention is being held, because she felt that, as someone simultaneously Muslim and American, her voice, her very existence, was being silenced by a political culture that brands her as a dangerous other.

Growing up in a predominantly Italian American neighborhood, Zayid says she was never bullied for being Muslim. “You’re from where Jesus was from,” her friends would say. Fifteen years after 9/11, they lean over to her and ask in a hushed tone, “Is Obama really a Muslim?”

She pointed to how former Speaker of the House and erstwhile vice presidential hopeful Newt Gingrich suggested, in the wake of the recent terrorist attack in Nice, France, that Muslims in the United States should be given a test to determine if they support Sharia law and deported if they didn’t answer to his liking. “Where would they deport me to?” Zayid asked. “New Jersey?”

The idea that Muslims are the enemy, that they’re not part of the fabric of American society, is spreading. Hate crimes against Muslim Americans have spiked since Trump began running for the Oval Office on policies like banning on Muslims from entering the United States.

The problem, Obeidallah argues, is that the way Muslims and Arabs are talked about in the United States has largely become a partisan issue. “Bigotry shouldn’t have two sides to it,” Obeidallah said, leaning his elbows into a table after his set, the suitcase at his side showing how briefly he plans on staying in town. “There aren’t two sides to antisemitism. There aren’t two sides to racism, at least in general. There’s not two sides to homophobia, at least in general. Clearly, there are two sides to Muslims or Arabs even being in this country. This has been the rhetoric from the right since way before Trump. Trump is just the biggest fish.”

The Democratic-Republican divide over Muslims wasn’t always so. Prior to 9/11, and the Republican-led wars in Iraq and Afghanistan, the GOP was the natural home for American Muslims. In 2000, George W. Bush won an overwhelming majority of Muslims—a generally socially conservative demographic with a high incidence of small business ownership. Today, the ranks of Muslim Republicans have thinned considerably. In recent election cycles, the GOP share of the Muslim vote was in the single digits.

When Obeidallah asked if anyone in the audience was planning on voting for Trump, the response was a spattering of halfhearted applause, instantly crushed by the deafening silence from the rest of the room.

“I think there were more Republicans here than [the ones who] applauded, to be honest. I talked to some afterwards who [said they] didn’t clap,” Obeidallah explained after the show. “If you’re a Republican Muslim right now, it’s very challenging… and they know that. Internally in their party and externally in their community. If you’re a Muslim Republican now and you tell me you’re a Muslim Republican, I’ll ask if you’re supporting Trump. Almost everyone I know says ‘no,’ but there are one or two that are. If they are supporting Trump, people are stunned.”

Obeidallah was disappointed there weren’t more Republicans in the audience, especially at an event only a short walk from the single largest gathering of conservatives in the country, but he chalked it up to the polarization fracturing the country writ large. “You can reach who you can reach,” he shrugged. “You can only do as much as you can, unless you make it a hostage situation and you kidnap a Republican and force them to listen to your jokes. But then you’re just perpetuating a negative stereotype.”

Even so, there are are people outside of the Muslim community who are speaking up. Obeidallah pointed to a particularly thoughtful and compassionate speech delivered by Hillary Clinton after the terrorist attack in a Orlando gay nightclub, but he expressed remorse that it didn’t get more media coverage relative to speech given by Trump, which saw the GOP nominee threatening American Muslims with “big consequences” if they didn’t do more to tip off law enforcement to potential terrorist threats.

One of the main problems, the comics argued, is that there aren’t enough Muslim voices elevated by the media to tell their own stories. “It’s deliberate,” Zayid charged. “It’s because we don’t fit the narrative. When was the last time you saw a Muslim woman on television that doesn’t cover her hair but is a practicing Muslim who speaks Arabic and has read the Quran?”

In the decade after 9/11, Zayid was a frequent guest on political talk shows. Yet, in recent years, those bookings have dried up entirely. “There aren’t diverse voices,” she said. “We don’t know what Muslims look like. We are only fed the story that we’re supposed to be fed and absolutely nothing else.”

Part of the issue with the pervasive stereotyping in popular culture that regularly prevents Arab Americans from telling their own stories is that it paints whole community with the same broad brush. While the Middle East is overwhelmingly Islamic, that’s not the case for Arabs living in the United States. A 2002 survey conducted by Zogby International and the Arab American Institute found that 63 percent of Arab Americans identify as Christians.

The fear being spread about Muslims has regularly led to people outside of the faith being targeted by harassment and, in some cases, physical violence. After a gunman killed six people in a 2012 shooting a Sikh temple near Milwaukee, many in the community speculated it the attack was a result of the shooter confusing Sikhs for Muslims. In that way, hate directed against one group can put the wider population at risk.

And the issue of representation extends to all corners of popular culture. “If you’re doing a show about Muslims, someone is going to be a terrorist,” Obeidallah noted. “You’re not going to have an Arabic family sitcom where no one is a terrorist. If you’re going to have someone’s Arab identity in a film, there’s going to be something involving terrorism, even if they’re not the terrorist. Something in there will touch on it. Our entire existence in entertainment media is tied to terrorism in one way or the other.

“If there was a Muslim family show where no one was a terrorist, you could be sure that right-wing people, ones at this very convention, would be upset about it,” he continued. “They’d say you’re doing this to whitewash terrorism to make us not afraid of Muslims.”

In a sense, this fixation on Muslims being terrorists is a result of American culture being normatively white and Christian. Terrorism is the primary frame through which many white Christians, a significant portion of whom don’t regularly interact with any Muslims on a personal level, relate to the Islamic faith. Pop culture, even when it’s about Muslims, is rarely for Muslims. That’s why Obeidallah and Zayid have had to carve out their own spaces like the New York Arab-American Comedy Festival and Axis of Evil Comedy Tour.

Zayid ended her set, as she always does, with a joke told entirely in Arabic. It was the first joke she ever heard her father tell—the joke he gave her when she first informed him she wanted to be a comedian.

I don’t speak Arabic, so I didn’t understand a word of it, and Zayid didn’t follow it up by translating the joke into English. She didn’t need to. The laughter erupting from the audience when she got to the punchline spoke volumes. That laughter might have caught in the throat of many an audience member, but at a time when the community sees itself as under assault simply for existing, it was the best they could hope for. At least, for now.

Editor’s note: This story has been updated to provide context around Arab Americans who don’t identify as Muslim.