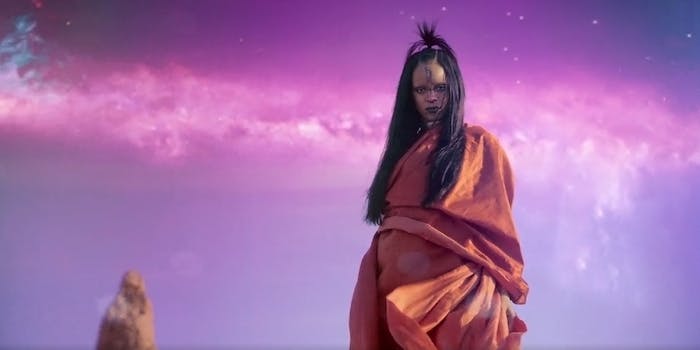 The song has moved beyond mere promo.

Rihanna‘s video for “Sledgehammer” debuted Thursday, after getting a tease in Monday’s trailer for Star Trek Beyond. It presents an inspirational summer beach look.

The track, which is available on Vevo and Tidal, is the first music video to be shot entirely for IMAX. It was directed by Floria Sigismondi, who’s done music videos for David Bowie and Katy Perry, and she told EW that they filmed the video at the majestic Trona Pinnacles outside Los Angeles: “Once you’re dropped in, you’re halfway there mentally. I don’t even think cell phones were working, which is great.”

“Sledgehammer”—which is not a cover of the Peter Gabriel song, though I’d be very interested to hear Rihanna’s take—has moved beyond mere promo and become a default tribute song for Anton Yelchin, the cast member who died earlier this month.

Star Trek Beyond debuts in theaters July 22. “Sledgehammer” is in IMAX theaters today.