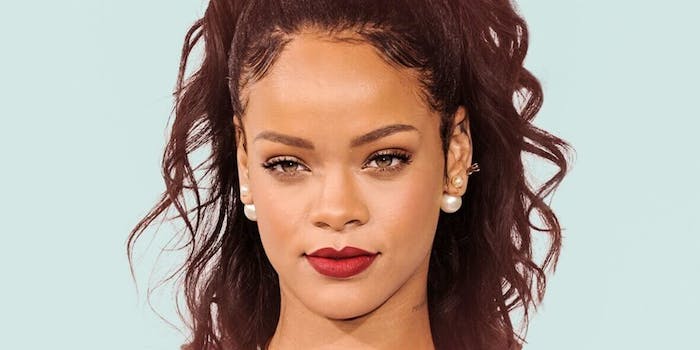 Jamaican and Bajan Twitter are feuding over Rihanna’s nationality

It all started when a Twitter user urged Jamaican Twitter to steal Rihanna from Barbados, where she is famously from. “Jamaicans, you know, if we pretend like Rihanna is Jamaican, the world would believe us and there is nothing the Bajans can do about it. Let’s kidnap Rihanna’s nationality, y’all,” they wrote, per Urbanislandz.

“One thing I’ve learned from this whole #RihannaIsJamaican saga is that we have the better graphic artists . . .” Twitter user @JulianCresser wrote.

One thing I've learned from this whole #RihannaIsJamaican saga is that we have the better graphic artists . . .

Another photoshopped Rihanna onto a Jamaican bill.

Who did this? Jamaican people nuh easy at all! But ah can see why we undefeated. 😂🤣😂 #RihannaIsJamaican 🇯🇲 pic.twitter.com/AEodf0KPnX

Another put Rihanna on a Jamaican political campaign. “#RihannaIsJamaican Barbados need to chill. Cause I remember this day like it was yesterday,” Twitter user @Officialreysoja wrote.

#RihannaIsJamaican barbados need to chill.
Cause i remember this day like it was yesterday. pic.twitter.com/9ynT7a47ai

Users are going as far as to edit her Wikipedia page and photoshop her onto a Jamaican passport. One valiant supporter of the cause even photoshopped the Jamaican flag onto Rihanna’s Twitter page.

Jamaican Twitter is proving it will do just about anything to earn Rihanna’s origin.

This #RihannaIsJamaican trend is gonna end with rih cussing us tf out.