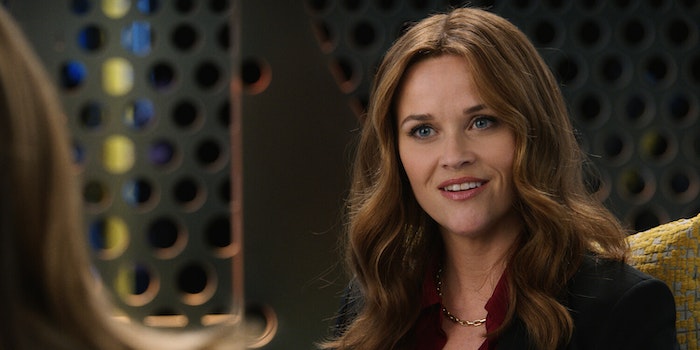 For the second, but hopefully not last, time in 2019, Reese Witherspoon used ice cream as a weapon.

The latest dairy onslaught occurs in the second episode of Apple TV+’s The Morning Show. Following a feisty interview with Morning Show anchor Alex Levy (Jennifer Aniston), network executive Cory Ellison (Billy Crudup) will do whatever it takes to get Bradley Jackson (Witherspoon) to join the team, reasoning that an anchor rivalry will boost ratings. He sets up a meeting between Bradley and Chip (Mark Duplass), the show’s producer, which bottoms out as he dismisses her off-hand.

Bradley won’t stand for this disrespect, and within minutes of meeting Chip, she yells at the producer, “You sound like an ice cream flavor!”

Bradley’s outburst isn’t Witherspoon’s first ice cream-fueled onscreen fight. Ahead of the second season of HBO’s smash series Big Little Lies, an image surfaced of Witherspoon revving up to hurl an ice cream cone at Meryl Streep. The scene set the internet ablaze but tragically ended up on the cutting room floor, inspiring a slew of memes and Twitter reactions in its wake.

The Reese Witherspoon ice cream meme is a perfect metaphor for Brexit. pic.twitter.com/pzxvfW5CpI

Witherspoon confirmed to Variety that the cone in question consisted of two scoops of coconut ice cream with sprinkles from Mother Moo in Sierra Madre, California. So she at least has good taste in flavors and toppings. She has good aim, too, as Witherspoon herself confirmed she landed a direct hit.

The omission of Witherspoon’s ice cream toss from Big Little Lies may be one of the greatest missed opportunities in recent television history. But at least The Morning Show seemed to pay winking homage to the incident.