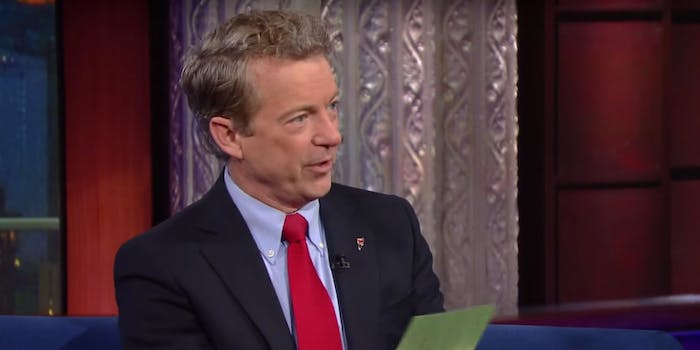 'You want someone with judgment.'

Rand Paul took shots at several of his fellow presidential candidates and their policies during a chat with Stephen Colbert.

In a discussion covering Paul’s haircuts, his choice of suits, and how they weren’t going to discuss pot, Paul, the Kentucky Republican senator, noted that there was “a certain seriousness to leading a nation of 300 million.” He went after Donald Trump and Chris Christie (the latter of whom he called “the big guy from New Jersey”)  for how eager Trump was to use the U.S.’s nuclear arsenal and Christie’s plans to bomb Russia. He also said he was troubled by Hillary Clinton‘s desire for a no-fly zone in Syria.

“I think that’s an important part of these debates is you want someone with judgment, someone with wisdom, and someone with restraint,” he said. “And I am worried.”

Interestingly enough, Colbert told Paul he had 30 seconds for a rebuttal after Jerry Seinfeld insulted his hair on The Late Show. If that’s the case, Trump will have a lot more time to respond to the jabs from other candidates if he ever returns to Colbert’s show.