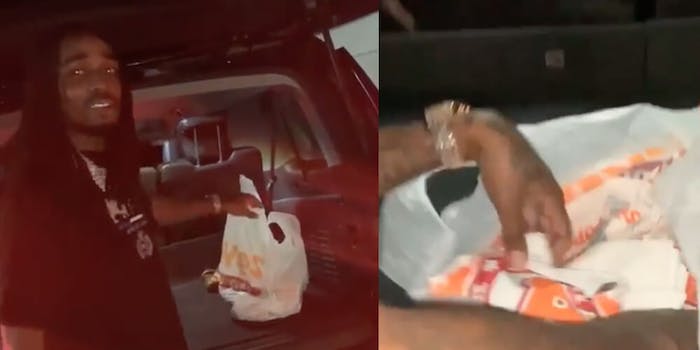 Would you buy a Popeyes chicken sandwich from Quavo for $1,000?

The chicken sandwich fad has Quavo, among others, feeling entrepreneurial.

The sandwiches have recently taken the internet by storm. People debated which fast-food restaurant reigned as the best chicken sandwich provider. As a result of the internet hype, many Popeyes restaurants ran out of the sandwich.

Quavo, who makes up one-third of Migos, posted a video on Instagram of his car with a bag full of the coveted sandwiches inside. The sandwiches, which usually sell for $3.99, are now going for 250 times the regular price, if you buy from Quavo, that is.

“I heard y’all boys was looking for them, they sold out everywhere,” Quavo jokingly says in the video, which has over 1 million views. “I got them things going for $1,000 a chicken.”

Apparently, Quavo isn’t the only person with an entrepreneurial spirit when it comes to the sandwiches.

One Twitter user posted a video of himself reselling the chicken sandwiches for $10 to $15. Another posted a screenshot from eBay, where they’re apparently going for $1,000.

“Got a Regular and Spicy Popeyes chicken sandwich $50 each DM Me Serious inquires ONLY!” a third person wrote on Twitter.

Reselling Popeyes Chicken sandwich outside of Popeyes for $10-$15 😂😂 pic.twitter.com/OWZOO11AGA

Yo they got a Popeyes Chicken Sandwich on Ebay. Do I place a bid? pic.twitter.com/NY8eXOrGor

Got a Regular and Spicy Popeyes chicken sandwich $50 each DM Me Serious inquires ONLY! pic.twitter.com/Syhtivxqie