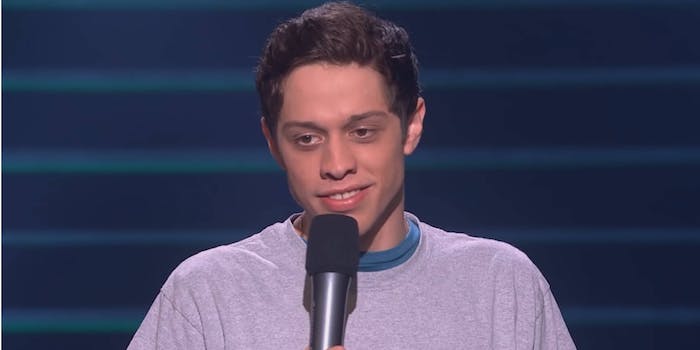 Pete Davidson fans have to take an NDA test, turns out.

According to multiple posts on social media, comedian and SNL cast member Pete Davidson asked attendees of his recent standup shows to sign a nondisclosure agreement, to ensure no one discussed the content online. If broken, it could reportedly cost a fan $1 million plus other legal fees.

A fan named Stacy Young posted an alleged copy of the NDA to Facebook last week, before Davidson’s Nov. 27 show at San Francisco’s Sydney Goldstein Theater. It requires that fans “not discuss any details of the show you are about to watch or your experiences at this event, period.” It also states that attendees are there “for the purpose of viewing ‘works-in-progress’ creative content.” If attendees declined to sign, they would allegedly get a refund.

boutta sign an NDA to see Pete Davidson do stand up

We saw Pete Davidson at the Varisty but I cannot comment on it because I signed an NDA. https://t.co/907XF9EfiN pic.twitter.com/LOC346riQA

And while the NDA news is making the rounds now, attendees have posted about having to sign one since September.

I'm about to sign an NDA to see Pete Davidson perform. So this is the only time I'll mention it lol.

While signing an NDA for a standup show is unprecedented, it’s not entirely surprising: Dave Chappelle has required attendees lock up their phones in Yondr pouches since 2015, and it’s become pretty common practice for bigger comedians over the last four years, as they attempt to thwart the recording of shows and out-of-context reporting on material. Before tour dates earlier this year, Louis C.K. sent out a copyright notice prohibiting the reproduction of his material.

Over the summer, Davidson stopped his set at the University of Central Florida to scold audience members for recording it, and allegedly called students “fucking retarded.” So he has reason to be proactive here. Of course, this could just be a scare tactic and not something that will actually be enforced or hold up in court. (And it hasn’t stopped people from making jokes about Davidson or the NDA.)

The Hollywood Reporter asked several legal experts about the legality of the NDA, which reportedly wasn’t presented to fans far enough in advance for them to negotiate terms. The consensus seemed to be that while it’s a little too broadly worded to be enforceable, it could be “an effective deterrent.” Entertainment litigator Bryan Freedman told THR that dropping the NDA on fans right before the show could prove more actionable: “The customers may end up having a better claim against him and the venue than he would ever have had against them.”

Davidson has not commented on the NDA. He performs two Florida shows with John Mulaney this weekend; the listing for the Orlando show only states that phones won’t be allowed.