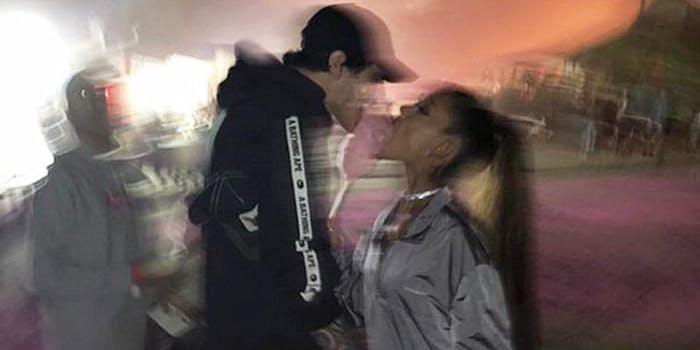 If the summer of 2018 will someday be remembered for nothing else, it will be the epic, yet flash-in-the-pan romance of Ariana Grande and Pete Davidson. There was the gratuitous, over-the-top PDA. There was the permanent inking of the skin, with the couple amassing nearly a dozen tattoos for one another. There was the pet pig, Grande’s “Pete Davidson” song, and who can forget the $93,000 custom-made engagement ring—all for a relationship that lasted less than six months.

And of course, there were also the memes.

From butthole eyes to big dick energy, Grande and Davidson’s brief union was the inspiration of more than a few, but just because they’ve since parted ways doesn’t mean the fun has to end. In the week and a half since the pair called off their engagement, they’ve been spotted out in public, respectively, displaying contrasting dispositions and body language.

While Grande was seen out shopping over the weekend with a friend looking flawless, arms full of Chanel bags, Davidson, on the other hand, was spotted walking by himself with an Ecko hoodie on. This led to many on Twitter (Ariana Grande fans, in particular) to speculate that Grande had somehow “won” the breakup.

THIS GETTING RID OF PETE DAVIDSON SERVE OH MY GOOOOOOOOOOD pic.twitter.com/fQncP0ojpr

she said NO TEARS LEFT TO CRY BITCH ! https://t.co/UP16mNtirV

he wearing ECKO in public in TWO-THOUSAND EIGHTEEN if that ain’t a cry for help ionno what is https://t.co/ToYSkFzsYz

Others came up with general memes about the breakup:

Me: I really don’t care what happened between Ariana Grande and Pete Davidson.

Honestly, while he’s probably seen better days at the moment, Pete Davidson is in all likelihood going to be just fine. Within a week of the split, the Saturday Night Live star was already cracking jokes at a comedy show in West Hollywood about looking for a roommate and covering up tattoos:

“So, obviously you know I, we [Ariana and I] broke up or whatever but when me and her first got engaged we got tattoos,” he later continued. “And it was like in a magazine like, ‘Was Pete Davidson stupid?’ And 93% of it said yes,” Davidson told the audience. “So my boy, he was like, ‘Don’t listen to that s–t man. They’re literally f–king haters.’ And I’m like, yeah, f–k that. I’m not stupid. And the other day we were in my kitchen and he was like, ‘Yo bro. Turns out you were stupid.’”