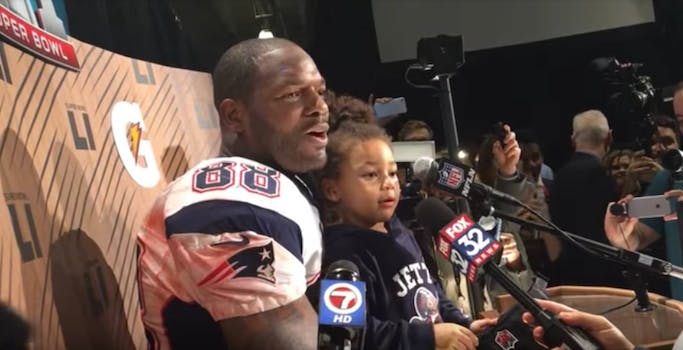 New England Patriots tight end Martellus Bennett will join a long list of sports champions who’ve skipped out on a team visit to meet the president of the United States.

In perhaps one of the most dramatic fourth-quarter rallies in Super Bowl history, the Patriots defeated the Atlanta Falcons 34-28 on Sunday in the first overtime victory in the history of the big game.

Bennett told the Dallas Morning News following the game’s conclusion that he won’t join his teammates in the traditional visit to the White House. The 29-year-old added that he’s not worried what his team’s owner, Robert Kraft—a close friend of President Donald Trump—will think of his snub.

Patriots TE Martellus Bennett said he will not go to the White House to honor Super Bowl win. Not worried about what his owner thinks.

Prior to the Super Bowl, Bennett told Fox 26 that he likely would not join the customary visit at 1600 Pennsylvania Avenue due to the fact that he doesn’t support Trump.

Reporters asked Bennett, a Houston native, how he felt about winning in his hometown.

“It’s amazing, man. The biggest thing here is that my daughter was here to see it,” said Bennett in a press conference after his team’s historic victory, as his 3-year-old daughter sat on his lap.

Bennett did not address the elephant in the room—that hundreds of Houstonians were marching outside the city’s NRG Stadium in protest of Trump’s policies—and seemed happy to let his daughter take over the mic as reporters asked questions on Sunday night.

The collision of sports and politics is often an unwelcome one, but this year it seemed impossible to avoid. Trump’s favorite team crushed the Atlanta Falcons–the home team of civil rights icon Rep. John Lewis (D-Ga.)–in the city of Houston, which has one of the largest immigrant populations in the nation and whose mayor has vowed to not enforce Trump’s policy against sanctuary cities.

Super Bowl halftime performer Lady Gaga is no fan of Trump, but she avoided any references to the president on stage despite expectations that she would. Her form of protest to Trump’s presidency seemed to be displayed through her chosen repertoire, which included Woody Guthrie’s protest anthem “This Land is Your Land” as well older hits like “Born This Way,” an LGBT anthem.

Trump fans on Twitter killed two birds with one stone, making a jab at the Falcons’ humiliating defeat as well as poking fun at Lewis and his protests of the president’s policies.

Bennett’s decision to snub Trump is likely to draw comparisons to the time when his teammate, Patriots Quarterback Tom Brady, opted to skip out on the team’s first and only visit to the White House to visit former President Barack Obama after their 2015 win.

Unlike Bennett, Brady didn’t opt out for political reasons but claimed he was too busy to meet Obama. The Boston Herald speculated that Brady was still sour after White House Press Secretary Josh Earnest made comments about the so-called Deflategate scandal.

Brady, who along with Patriots coach Bill Bellichek is close with Trump, likely won’t skip this year’s visit. However, Brady has avoided coming out explicitly in favor of Trump or commenting on his policies.

Now considered the greatest quarterback of all time, Brady feigned ignorance when asked about Trump’s controversial ban on immigration from seven Muslim-majority countries and refugees.

“What’s going on in the world? I haven’t paid much attention. I’m just a positive person,” Brady blithely told reporters earlier this year.

Following a year where San Francisco 49ers Colin Kaepernick’s decision to sit out on the National Anthem drew massive backlash, many other athletes have remained firm in their decision to focus on their game. Both the Falcons and the Patriots largely avoided questions about Trump prior to the Super Bowl.

“Well, I’ve been doing a lot of reading on [Trump’s immigration executive order], and I don’t think it really matters what I think,” Patriots offensive tackle Nate Solder told reporters.