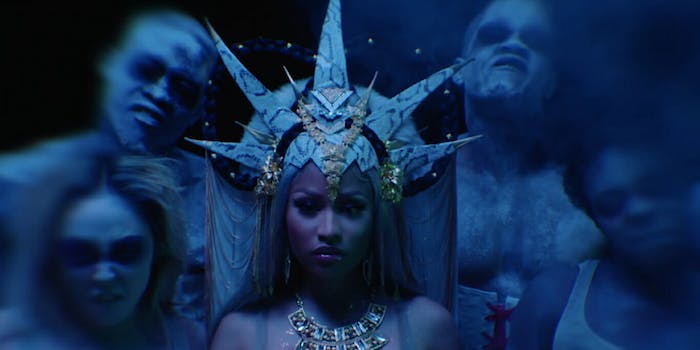 They found references to Drake, the Grammys, and more.

Nicki Minaj has been relatively quiet lately, following a tumultuous 2018 that had her beefing with several celebrities, including Cardi B, Drake, Travis Scott, and Kylie Jenner. She’s now back with a vengeance and breaking her silence with a visually compelling music video for “Hard White” from her 2018 album Queen. Fans think it’s rife with clapbacks against all the issues that plagued her the past year.

#HardWhite video now on all platforms

Fans were quick to notice her choice of characters to portray. “Nicki Minaj channeling Hades, goddess of the underworld. She really said, ‘Y’all want me to be the bad guy,’ huh,” notes Twitter user @LaminbeeIV.

Some drew parallels to the Jennifer Lopez sci-fi horror movie The Cell: “The video is shot in the mind of a serial killer,” tweets user @HoneyGuwop.

Fans tried to analyze the video’s story and “symbolism” while noting allusions to some of her most recent and highly publicized feuds.

So, we are going to ignore the fact that #GanjaBurns & #HardWhiteVIDEO basically tells a story? Or is it just me? Just me? Okay, cool. pic.twitter.com/h9YyHeUmRX

Users like @TurntMinaj think she successfully dissed everyone who crossed her last year, tweeting that “Nicki dragged the grammy’s, drake and cardi b to dust all in 5 seconds.”

The video release seems timed to draw up publicity for Minaj’s Nicki WRLD TOUR with Juice Wrld, which kicks off this month in Europe. But we can’t help but notice it dropped over a week before the 2019 Grammy Awards (Feb. 10). A brief clip of what looked like a Grammy trophy sent fans speculating that the video is a diss at the music awards, which snubbed her this year. (She was even trolled for it.)  “Sis trying to tell y’all she don’t need a grammy to know her spot that’s a real Queen for ya,” says @notime4bullshhh.

One of the most striking visuals in the video was a scorpion in pieces, which fans consider to be major shade thrown at Drake and his Grammy-nominated album, Scorpion. Aside from being among the top Grammy nominees, Drake was also supposedly more prominently promoted by Spotify at a time it could have been highlighting Queen, according to Minaj. (She also dissed him in “Barbie Dreams.”) This probably led fans to zoom in on that quick scorpion clip: “Did y’all notice that Drake is featured in the video?” asked user @beyonikaw.

Did y’all noticed that Drake is featured on the video?????? Love that #HardWhiteVIDEO pic.twitter.com/OtTJr21Tzv

One of several feuds Minaj had on Twitter in 2018 was with writer Wanna Thompson, who was harassed relentlessly for writing music criticism about Minaj. Fans now consider the clip of the dead bird in the “Hard White” video to be a reference to this particular controversy. User @askmesucka even went so far as to say “Nicki addressed the chit chat amongst the hating n****s of the culture/industry. Including blogs etc. Nicki made this visual this way for a reason. It’s to make you think. Understand that she’s applying pressure to necks even more now.”

#HardWhiteVIDEO let's keep it a buck, Nicki addressed the chit chat amongst the hating niggas of the culture/industry. Including blogs etc. Nicki made this visual this way for a reason. It's to make you think. Understand that she's applying pressure to necks even more now.

Nicki dissed:
– Grammy
– The birds that talked shit about her
– Drake
– and the media that tried to take her down
All in ONE music video #HardWhiteVIDEO @NICKIMINAJ pic.twitter.com/d34lxPMLwi

Some also believe the birds are a symbol for Cardi B.

As if to confirm that she’s clapping back on detractors in “Hard White,” the video also supposedly marks the return of Minaj’s alter-ego, Roman Zolanski, as fans were quick to flag. Minaj has a number of alter egos, and Roman “is Minaj’s most well-known and utilized alter ego, as well as her self-professed favorite. Zolanski is described as an orange haired homosexual male from London, England, characterized as being far more outspoken (and perhaps malicious) than Minaj herself,” according to nickiminaj.fandom.com

So Roman got resurrected??? #HardWhiteVideo cause that wasn’t Ms Chun Li…. pic.twitter.com/ZZZ8sFJOcp

Don’t you just love it when artists go to great lengths to throw shade in their music videos?