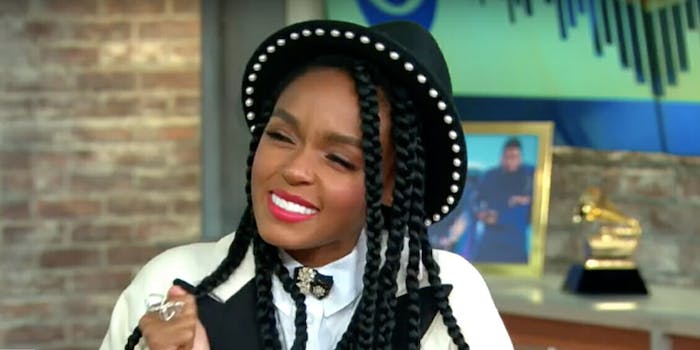 The nominees for the 61st annual Grammy Awards hit the internet on Friday, and immediately seized the spotlight on Twitter.

Kendrick Lamar leads the list with eight nods, primarily for the Black Panther soundtrack, which was nominated for album of the year. Drake is also up there with seven nods and Lady Gaga has five—four for the song “Shallow” from A Star Is Born with Bradley Cooper. (The movie’s soundtrack is not eligible for any Grammy nominations, according to the Hollywood Reporter.)

Five out of eight nominees for album of the year are women: Cardi B, Brandi Carlile, H.E.R., Janelle Monae, and Kacey Musgraves. Even more monumental still, women dominate major categories, as the New York Times points out. It’s a huge deal, especially after the Recording Academy was criticized for not nominating enough women in the 2018 Grammys, as THR notes, and giving only one of eight awards at the telecast to a woman, with Rolling Stone asking “What Do The Grammys Have Against Women?“

More and more artists are taking to social media to express their delight over the honors:

Art is thriving. I’ve been so inspired by the creative climate this year has generated, and I’m SO thankful to be nominated alongside some truly brilliant & innovative artists. Thank you from the bottom of my heart. Xx pic.twitter.com/G0FhNCpbOa

Congrats to all of you!! I’m a fan of each of you and it’s an honor 😊🙏 a big thank you to my amazing team that helped this album come to fruition! #Atlantic #writers #producers #musicians I respect and appreciate all of you! Thank you! https://t.co/cCW3owERwS

TWO GRAMMY NOMINATIONS!! BEST NEW ARTIST AND BEST DANCE RECORDING FOR ELECTRICITY!!! I AM SO HUMBLED AND GRATEFUL. THANK YOU! ❤️❤️❤️❤️❤️ @recordingacademy

WHY DON’T YOU JUST MEET ME AT THE GRAMMYS! 5 nominations?! I am so honored @RecordingAcad and so proud of all my GRAMMY NOMINATED FRIENDS.😭🙌🏼😭🙌🏼 pic.twitter.com/keMd8HehB9

I grew up in Texas, singing to @xtina everyday, DESPERATELY trying to hit her high notes.. if you would’ve told me I’d have a Grammy nod with her I would’ve laughed in your face!! This is so surreal..

Janelle Monae’s reaction to her nomination was also caught on live television while she was being interviewed by CBS News:

As a testament to the popularity of Korean boyband BTS, especially online, Grammy tweets were immediately taken over by fans congratulating the group for their nomination for best recording package. Reading their emotional tweets, you’d think BTS was nominated for top honors.

How do you guys feel about BTS’ GRAMMY nomination?

Reply with ONE WORD to describe your feelings! 💜🎧

So are we coming for Oscars next or what??@BTS_twt
https://t.co/eY6BbsEsyh

CONGRATULATIONS to @BTS_twt‘s ‘Love Yourself: Tear’ for earning a 2019 Grammy nomination for Best Recording Package. This is a huge step for Korean music and @BigHitEnt. Here is more information about the significance in this recognition: https://t.co/Fe4JJxhoWV

On the other hand, several big names were surprisingly snubbed in major awards, including Taylor Swift, Ariana Grande, and the Carters (a.k.a. Jay-Z and Beyonce’s collaboration). Naturally, Swift fans are in meltdown mode.

Swifties I have made a petition to help Taylor at the Grammys. It would mean the world if you could sign it. Ily 💞💋🥰. Swifties and fans of Taylor Swift and her music : Taylor Swifts REPUTATION album deserves better at 2019 GRAMMY’s https://t.co/LttmleSudC

💬| Not to sound completely salty, but the best selling album of 2017 and 2018 wasn’t even nominated for Album Of The Year, despite being consistently rated higher than 3 of the other nominated albums

Fuck it, I AM salty. Are the Grammys drunk?

With social media abuzz about Grammy nominees (and snubs), we can expect an exciting awards night on Feb. 10. The 2019 Grammy nominees compilation album is coming Jan. 25, according to Billboard, and you can check out the full list of nominees here.